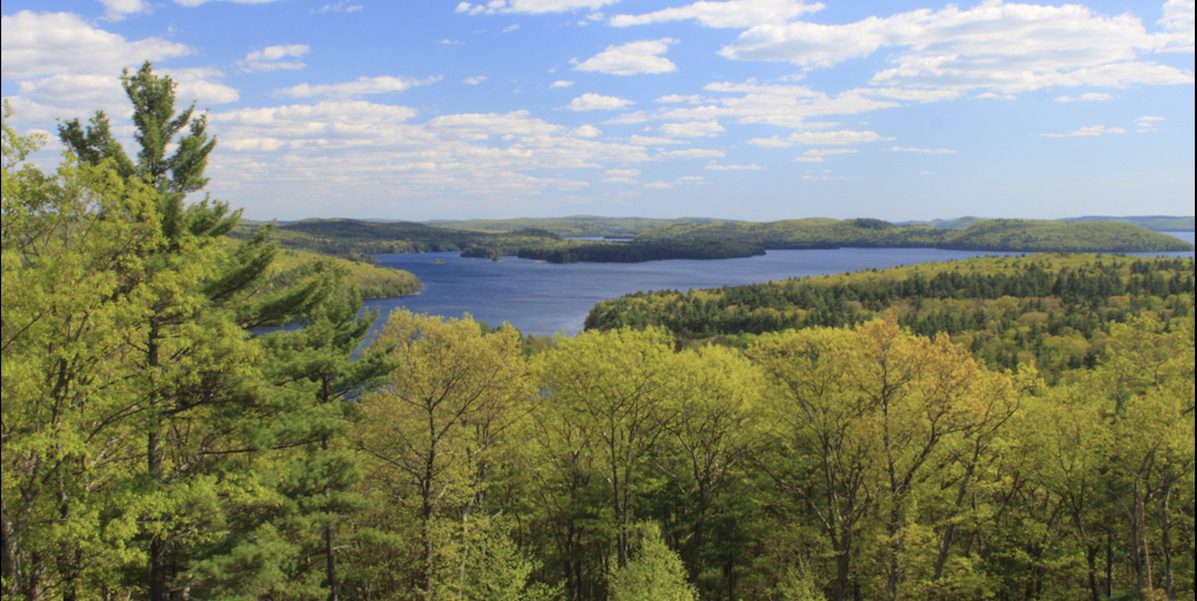 Late last year, four siblings inherited 30 acres of forest in the Pelham Hills. This relatively small woodland meant the world to them. They wanted to protect it not only because of their love of the land, but to preserve the place where their family’s memories were made. To honor this legacy, the siblings worked with Kestrel to conserve the land forever as the H. Ames & Deanna Harrison Memorial Forest.

This is a familiar story of conservation, repeated time and time again. Yet, this conservation project, though small in size, marks a significant milestone. This family’s land was the 55th project completed in a 50,000-acre stretch of forest west of the Quabbin Reservoir in the sparsely populated towns of Pelham, Shutesbury, and Leverett, into northern Belchertown, and along the Mt. Holyoke Range. Including this most recent 30 acres, Kestrel has now helped willing landowners conserve 10,000 acres of this important forested region in partnership with public agencies since 2002.

When viewed on a map, the region west of the Quabbin emerges as a giant jigsaw puzzle of hundreds of individual parcels, owned by many different families. Most pieces are only 30 to 50 acres in size. Piecing this puzzle together to conserve significant forested areas is an enormous conservation challenge.

The effort to put together the pieces began 20 years ago with a group of volunteers that included Kristin DeBoer, who would soon become Kestrel’s Executive Director. Trained by Keeping Track, a citizen science program for wildlife tracking, they searched for signs to document a wildlife corridor between the Quabbin and the Mount Holyoke Range.

“I was thrilled by what we found,” Kristin recalls. “Bobcat prints in the mud. Otter slides in the snow. Moose scat on the forest floor. Bear scratches on birch trees. These mammals require large stretches of connected forest to make a living. Protecting their habitat also makes it possible for a multitude of other species that share the forest to survive and thrive.”

Around the same time, the University of Massachusetts developed a mapping program known as the Conservation Assessment and Prioritization System (CAPS) to identify large contiguous areas of land with high ecological integrity. That means an area is able to support its plants and animals, as well as the natural processes needed to sustain that biodiversity over the long term. The West Quabbin region was flagged by CAPS as one of the most ecologically significant forested regions in the Commonwealth, making it a top priority for conservation.

In order to achieve measurable progress in conserving these large forests, we had to put together the biggest pieces of the puzzle. That’s why we engaged the largest landowner in the region as a conservation partner—WD Cowls. Fortunately, they were up to the challenge of landscape-scale conservation. Of the 10,000 acres conserved with Kestrel since 2002, more than half was completed in partnership with Cinda and Evan Jones, two siblings who own WD Cowls. 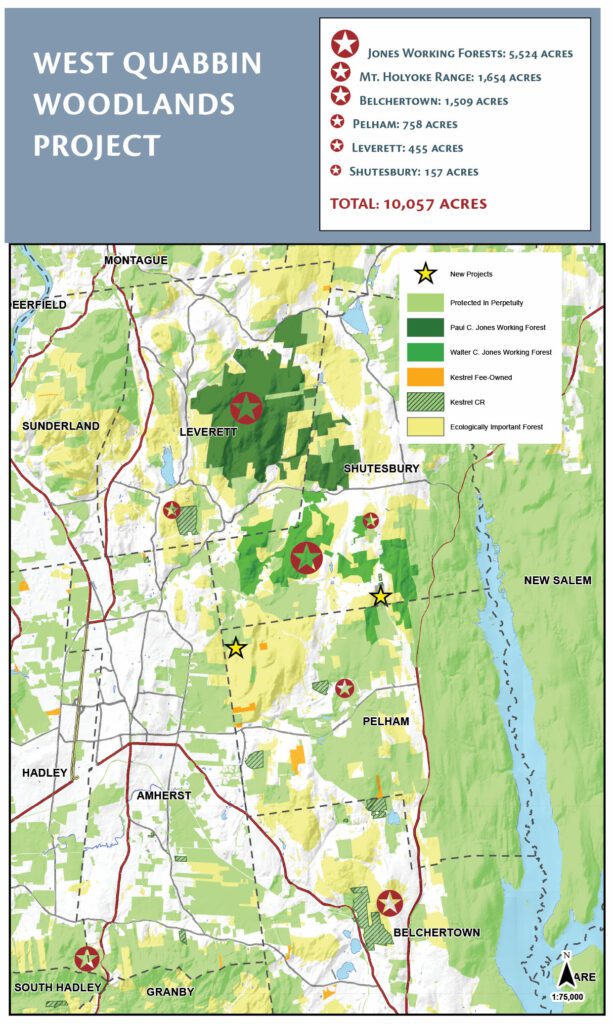 Cinda & Evan have been willing to permanently conserve vast areas of their family’s woodlands—the foundation of their local wood business. The 2,038-acre Walter C. Jones Working Forest was conserved in December 2020. The 3,486-acre Paul C. Jones Working Forest was conserved in December 2011. Named for their father and grandfather, these landmark projects honor their family’s nine-generation legacy. The private woodlands in Leverett, Shutesbury, and Pelham are conserved with a permanent Conservation Restriction (CR)—the largest private CRs in the state—held by Massachusetts Department of Fisheries and Wildlife. The CR ensures sustainable forestry to maintain wildlife habitat and guarantees public access for hunting, fishing, and hiking.

Conserving large forest areas like these enables swift progress on the forest conservation puzzle. But it takes perseverance and pragmatism to add more pieces that depend on landowners with parcels of all sizes, from large to small. Most landowners are not able to conserve every piece of land they own, as it’s often their most valuable asset. And, funding for conservation is limited.

Large blocks of forest (at least 500 acres) tend to be the most ecologically valuable and least expensive to protect per acre. Smaller parcels with road frontage are more developable and therefore more expensive. Sometimes these are excluded from the project to make it affordable to conserve a larger area of more ecologically important back woods.

The nature of puzzles is that it takes time to put them together, one piece at a time. This conservation puzzle may never be 100% complete. Some pieces will be lost. Yet, protecting as much as possible of the remaining forest west of the Quabbin—as wildlands and woodlands, for wildlife, for water, for the climate, for recreation, and for local wood—is a puzzle worth solving for the future.

The Latest Pieces of the Puzzle

➤ CONSERVED: H. Ames & Deanna Harrison Memorial Forest in Pelham: Though small and not far from the population center of Amherst, this parcel provides core forest habitat and a connection to larger forested areas to the west. Now owned by Kestrel, the area will be managed for mature forest to help mitigate climate change, and to preserve popular recreational trails. New trails may be created in the future as part of a regional trail system.
➤ IN PROGRESS: 34 acres in Shutesbury: This land on the Shutebury/Pelham border rates high in ecological integrity and offers other important conservation values, including protecting water supply. It includes the headwaters of Amethyst Brook and features a historic dam/mill site. Conserving this parcel will expand protection of the wildlife corridor into the Quabbin Reservoir, and will provide opportunities for passive recreation. Kestrel is working with the town of Shutesbury to purchase and conserve this land.