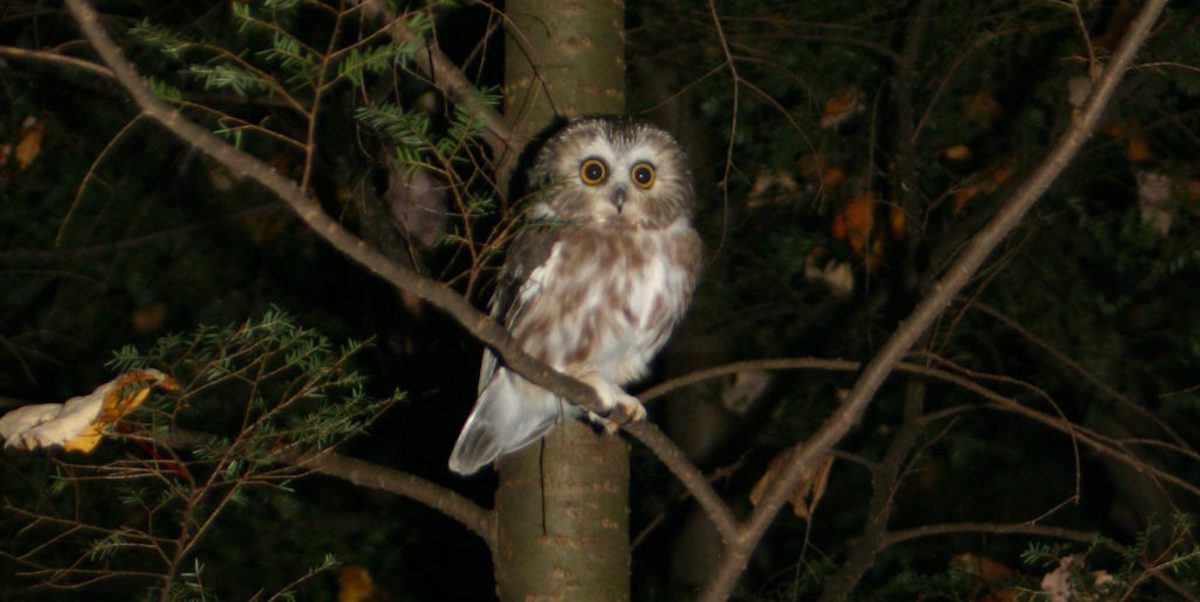 The diminutive and rarely seen Northern Saw-Whet owl ranges over much of North America, and is one of the smallest owl species on the continent, maxing out at about 8 inches tall and less than 4 oz in weight—roughly the size of an American Robin. Learn more about them here.

Kestrel Land Trust’s Stewardship Director, Chris Volonte, has studied the migration of these tiny owls in southwestern New Hampshire, while Kestrel board trustee Anthony Hill, a certified master bird bander, has studied their movements in our region. Over the past several years, Chris and Anthony together have periodically teamed up to determine whether Saw-whet Owls are present in the Mount Holyoke Range during their fall migration. This year’s search for the little Saw-whet was a big success. 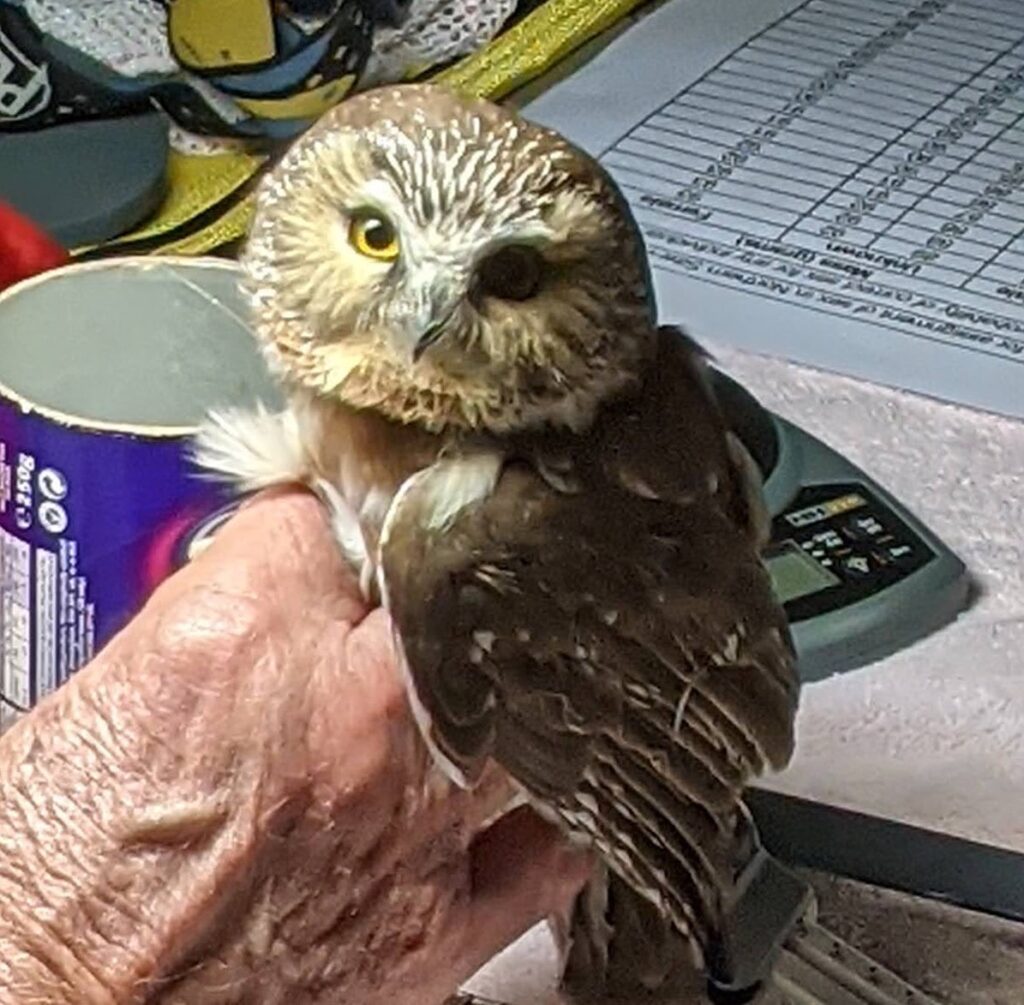 Over three cold, clear nights in mid-November, Anthony and Chris carefully netted and banded 15 owls at the Sweet Alice Conservation Area adjoining Kestrel’s office on the Mount Holyoke Range in Amherst. On the second evening, during a small public event, they demonstrated the process to a lucky group of onlookers.

The effort is part of Project Owlnet, a long-term collaboration in which scientists, researchers, and trained citizen scientists collect and share data to learn more about the migration of Saw-whet Owls. The migration habits of these owls were not well known before this project started in the mid-1990s.

All owls were safely handled by these two trained banders under federal and state permits. Each owl was fitted with individual ID bracelets, weighed, measured, and carefully released after a period of waiting to allow their eyes to adjust to darkness after being under a light. 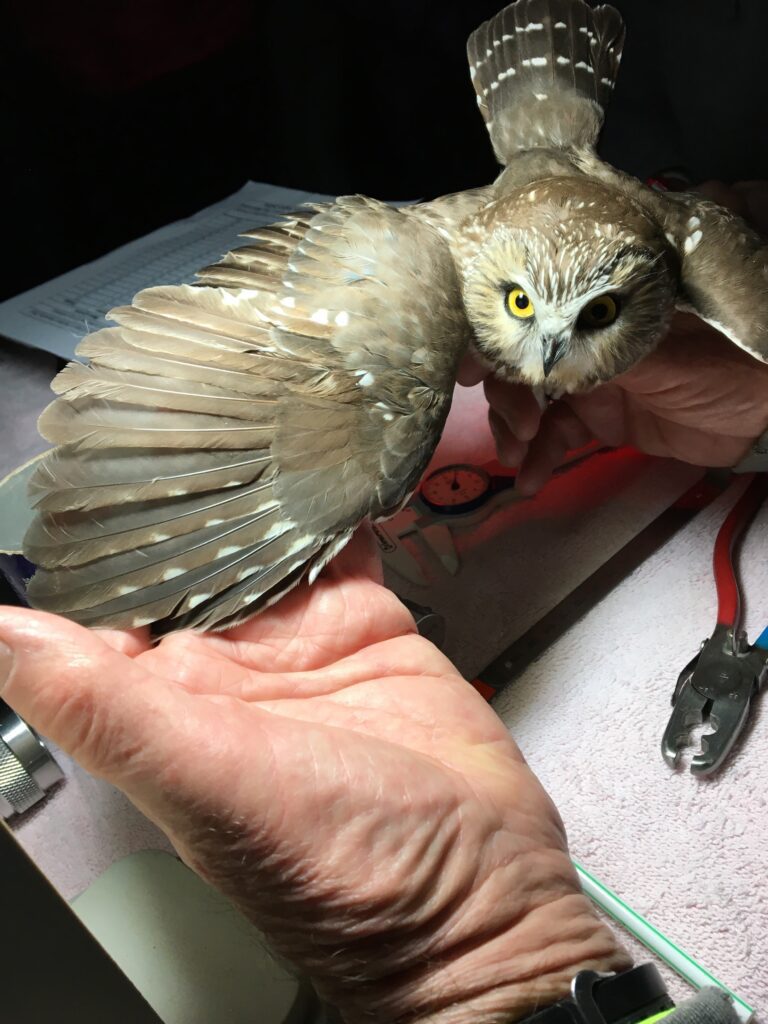 All the data they collected will contribute valuable information to the archive managed by the U.S. Bird Banding Lab run by the US Geological Service. This information helps scientists and conservation professionals develop effective habitat management and conservation efforts.

The first Saw-Whet owl that Chris documented on a Kestrel Land Trust conservation area was in 2012 in Belchertown, a first-year female. In January 2013, we received some exciting news: that same young female owl had been found in another bird-bander’s net. The tiny traveler landed in the Powhatan Wildlife Management Area approximately 30 miles west of Richmond, Virginia. In the 25 days between being found in Belchertown, this owl had flown more than 500 miles, clocking an average speed of 20 miles per day.

The far-ranging travels of the tiny Saw-whet Owl give us one more important reason to protect large, connected areas of forests that provide critical wildlife habitat in the Valley and beyond.