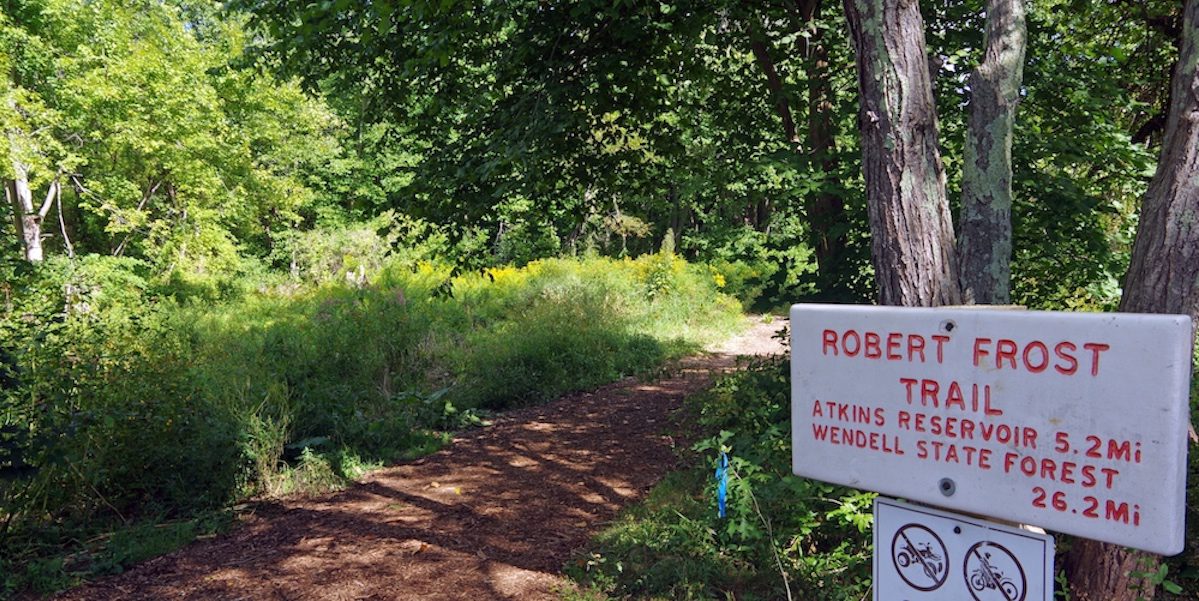 As part of our organizational commitment to create and support recreational trail opportunities in the Connecticut River Valley, Kestrel Land Trust is working to ensure the longevity of the Robert Frost Trail (RFT) with trail maintenance and revitalized community involvement. Our immediate objective is upkeep of the 25 or so miles of RFT located on public and other protected lands.

How the RFT Project Started
The wooded hills of the Connecticut River Valley are a beloved place for locals and visitors to wander. One of the most famous explorers of these woodlands was distinguished poet Robert Frost, who worked at Amherst College periodically between 1916 and his death in 1963. While serving as an English professor at the college, Frost lived in a small house overlooking Amethyst Brook and the wooded slopes beyond.

As the 20th anniversary of Frost’s death approached in 1982, the Town of Amherst was inspired to create a long-distance trail in honor of the poet, centered on the location of his Amethyst Brook home and stretching north to Wendell State Forest and south through the Mount Holyoke Range. Amherst Director of Conservation Pete Westover led the project, which received support from municipal and state officials, private landowners, and volunteers associated with The Kestrel Trust (now Kestrel Land Trust).

The approximately 37-mile Robert Frost Trail (RFT) winds through the heart of Kestrel Land Trust’s service area east of the Connecticut River, including the town of Amherst, where our work began more than 50 years ago. The trail serves communities we serve, and because of that, Kestrel feels a natural affinity for the RFT. With our knowledge of the region through which it passes, we are well positioned to help ensure the RFT’s care as it ages.

Originally, maintenance of the RFT was handled jointly by the Amherst Conservation Department, volunteer members of the Amherst Area Trails Committee, and a summer seasonal crew funded in part through the Kestrel Trust. Over time, as initial volunteer involvement faded and both the Town and Kestrel expanded in size and responsibilities, care of the RFT slid out of focus. Today, deep into its third decade, the RFT is showing wear and tear, with an accumulation of deferred maintenance issues contributing to unsustainable conditions in some areas, particularly the more remote locations. Wet weather patterns and more frequent high-wind events increase the need for maintenance.

As the trail approaches its 40th year, Kestrel is working to ensure continuity of care for the RFT’s next 40 years and beyond, by offering our own staff time, volunteers and other resources; by collaborating with the trail’s original supporting community, the Town of Amherst; and by encouraging and expanding the involvement of other municipalities, user groups, community organizations, and individuals who enjoy and value the trail.

Fundraising to Support Trail Improvements
KLT has received public grants from the MassTrails program to support the Robert Frost Trail Revival–-a co-application with the Town of Amherst in 2019 with a focus on public lands within the Town, and a solo application in 2021 to fund trail maintenance on the portion of the RFT that runs through the Mt. Toby State Forest (Sunderland) and the Ruth M. McIntire Conservation Area (Leverett). The Mt. Toby section of the Robert Frost Trail was originally created in 1987 with funding awarded to the Kestrel Trust from the Department of Environmental Management (now Department of Conservation and Recreation).

Additionally, Kestrel has received a $20,000 grant from a family foundation to support the RFT. This funding is being used to support replacement of three bridges used to cross over streams on the RFT at the Lawrence Swamp and Amethyst Brook Conservation Areas in Amherst, and to fund the formal designation of a RFT route through Skinner and Mt. Holyoke Range State Parks.

The Robert Frost Trail Designation in Skinner and Mt. Holyoke Range State Parks
The original vision for the RFT was that it would run between the Ranger Station at Wendell State Forest and Rt. 47 in Hadley, a distance of approximately 37 miles. The only existing Robert Frost Trail Guide, issued in 2004 by the town of Amherst, describes 14 completed RFT sections between Wendell State Forest and Rt. 116, along with a proposed “Holyoke Range West” route that would connect Rt. 116 (at the Notch Visitors Center) and Rt. 47, completing the traverse of the Mt. Holyoke Range from Bay Rd. to Rt. 47.

However, the western section of the RFT never came to fruition. In 2017, when Kestrel assisted the Department of Conservation and Recreation (DCR) by applying for a Recreational Trails Grant to install improved trail signage throughout Mt. Tom and the Mt. Holyoke Range, signs between Rts. 47 and 116 made no reference to the RFT. With our experience collaborating with DCR to create and install signage throughout the Range, we saw an opportunity to make this RFT trail section a reality. Collaborating with DCR, we have selected an RFT route on existing trails and identified needed signage updates. Next, Kestrel will coordinate sign fabrication and formally establish the route by installing signage and blazing with volunteer assistance from the Mt. Holyoke College chapter of Circle K International, and its Outing Club. Timing will depend on speed of sign production and weather; we expect to be able to complete the work in early spring 2022 at the latest. 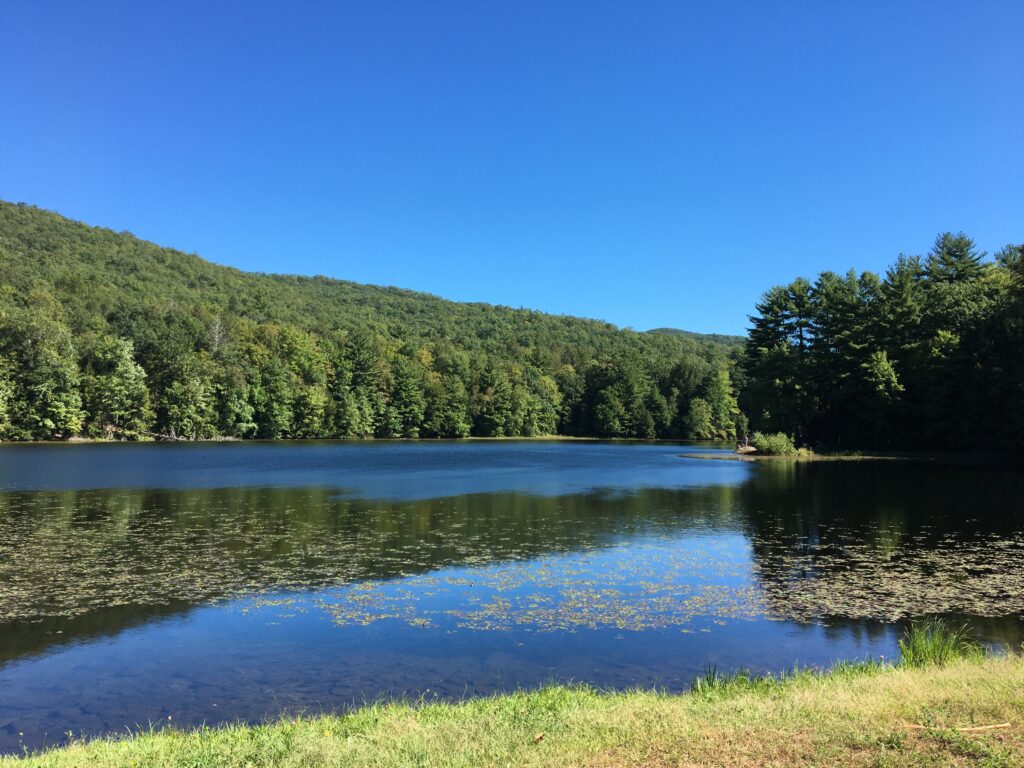 The newly designated route fulfills many aspects of the original vision. Departing from the Mountainside Trailhead on Rt. 47, it climbs to Taylors Notch, descends to the lovely Lithia Springs Reservoir, then climbs between the Seven Sisters and Mt. Hitchcock before gently descending again on the northern side of the ridge toward Rt. 116, passing through a portion of 420 acres recently protected on the Mount Holyoke Range by Kestrel with Hadley and Amherst College. The length is just under 5 miles, bringing the total trail length of the RFT from approximately 37 to 42 miles.

We are grateful for the cooperation of DCR, Town of Hadley, Amherst College, Peckham Industries, Inc. and New England Mountain Biking Association (NEMBA) for their permissions and support of the RFT designation in this area.