The Connecticut River is the lifeblood of Western New England and one of the most important natural areas in Kestrel’s region. Running from Canada to Long Island Sound, this watershed and connecting greenways provide habitat for many species of fish, plants, mussels, and insects, as well as an important avian migration route, and recreational opportunities for everyone.

Kestrel works with other land trusts and government agencies to protect land along this important waterway and its tributaries, all part of the Silvio O. Conte National Fish & Wildlife Refuge.

When a 32-acre property on Moody Bridge Road in Hadley went up for sale in 2011,  it was clear that it was a “must-save” piece of land. The property is in the heart of a mosaic of farmlands and grasslands extending north from the base of the Mt. Holyoke Range to the Fort River in Hadley and Amherst. It also sits in the center of the Conte National Wildlife Refuge.

Kestrel stepped in to prevent this scenic and ecologically valuable land from being sold for house lots by taking the property off the market with a loan from The Conservation Fund. Then, when the land was secure, Kestrel turned over  ownership of this prime grassland habitat to the U.S. Fish & Wildlife Service as part of the Silvio O. Conte National Fish & Wildlife Refuge, ensuring that it will remain permanently protected.

This land at the Fort River Division helps  protect the longest free-flowing tributary to the Connecticut River in Massachusetts. The Fort River and its surrounding lands provide habitat for the federally endangered dwarf wedge mussel and rare bird species.

Freedom for the Physically Challenged 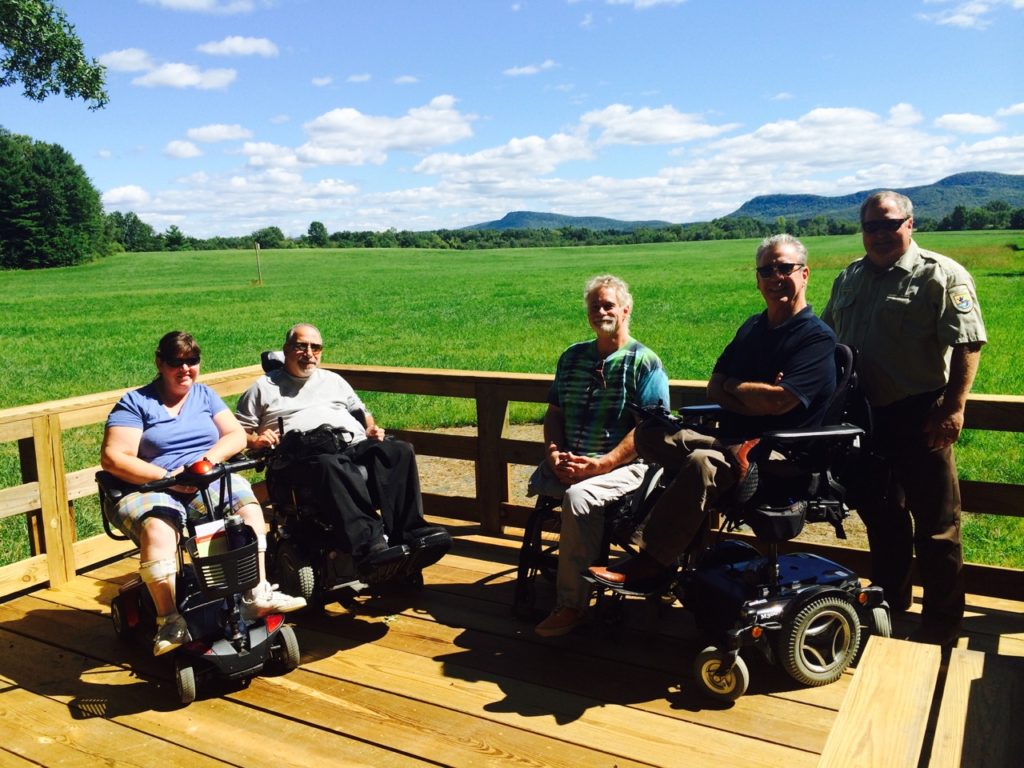 Today, this division of the national wildlife refuge also provides freedom to the disabled community. In October 2014, universally accessible Fort River Trail opened, enabling people of all abilities to explore the woods, meadows, and riverside lands.

A 1.2-mile path provides a firm gravel surface for wheelchairs with a low, wooden border on either side so that the visually impaired can navigate with a cane. Wooden boardwalks traverse wetland areas and benches provide scenic places to rest surrounded by nature.

The project was the brain-child of Andrew French, project leader of the Conte Refuge, who notes that though our region has many recreational trails, very few are universally accessible. Having spent 8 months in a wheelchair after an accident many years ago, he understands the need for them personally.

The majority of the trail is on a parcel of land that Kestrel secured for the Refuge. This was part of the 300 acres of land purchased for the Refuge in Hadley over the last decade in partnership with Trust for Public Land. “They acquired the property when we were unable to,” French said. “It would not have happened if it weren’t for Kestrel Land Trust.”