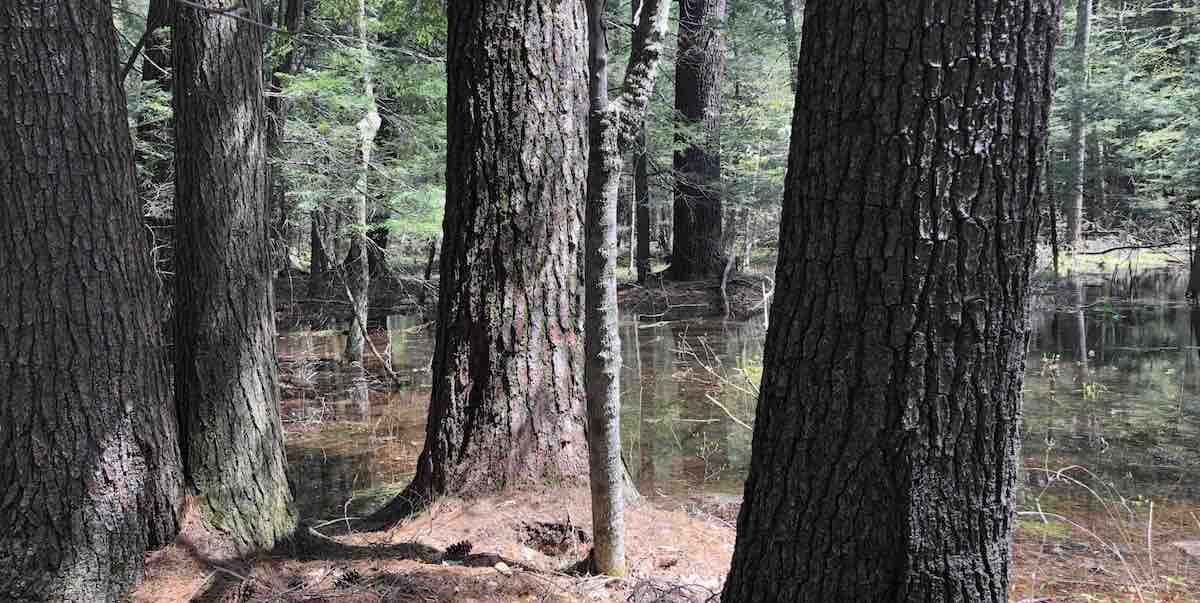 Imagine stepping back into New England 400 years ago. The landscape is dense with trees of all sizes—some of them are giants. There’s a lush, green understory of ferns, wildflowers, and mosses sprouting from a thick, spongy layer of duff on the forest floor. This rich structure is the old-growth forest that coexisted with native peoples.

In the 1700s, European settlers moved in and most ancient forests were soon lost to their axes, one tree at a time. Much of New England was transformed from old-growth forest to open pasture. As farmers moved westward in the 1800s, the forests grew back, but eventually many were cut a second time.

Generations later a Southerner with a love of documenting big trees began exploring Massachusetts. In the 1980s, Bob Leverett was hunting for large white pines when he started seeing areas that differed from typical New England forests.

“What I was seeing were physical characteristics that looked like the Smoky Mountains region where I grew up,” Bob recalled. Old-growth forests are much more common there, and Bob thought he had seen a number of sites like this in New England. “I realized then that we probably had small patches of bona-fide old-growth forests here.”

Researchers, including Bob, have now found that less than 1/10 of one percent of all forests in the state are in fact old growth. Recent studies also suggest that the largest trees provide critical benefits that smaller trees don’t, including stabilizing the surrounding ecosystem and storing large amounts of carbon. This is an area of research that is only now coming to fruition.

A Fund for Conserving Forests as Forever-Wild

For the past 35 years, Bob (and more recently with his wife Monica Jakuc Leverett) has championed the benefits old-growth and mature forests. These benefits include “supporting the complex web of life, carbon sequestration, water quality, and the restoration of the human spirit.” For this reason, the Leveretts have made a generous commitment to help Kestrel Land Trust conserve forested wildlands in the Pioneer Valley.

“We have established the Monica and Bob Leverett Forever-Wild Conservation Fund at Kestrel Land Trust to encourage the preservation of our mature forests to continue their benefits into the future.”

With a gift of $10,000 to Kestrel in 2018 and a bequest planned for the future, this new fund is dedicated exclusively to conserving forests as “forever-wild, leaving the woods alone to develop as nature so masterfully designed them to do,” they explained. Management of these forests will be permitted only to remove invasive species, control insects or pathogens, and create hiking trails.

“Our goal is to preserve wildlands that are on their way to late-successional status in order to maximize their advanced rates of carbon sequestration and mitigate climate change.” The Fund will also support Kestrel’s creation of education materials and programs to build awareness about the benefits of “forever-wild” conservation options for landowners.

“As residents of the Connecticut River Valley for decades, we want to pass on a legacy of stately, inspiring forests,” the Leveretts said. “We hope that others will join us in this mission.”