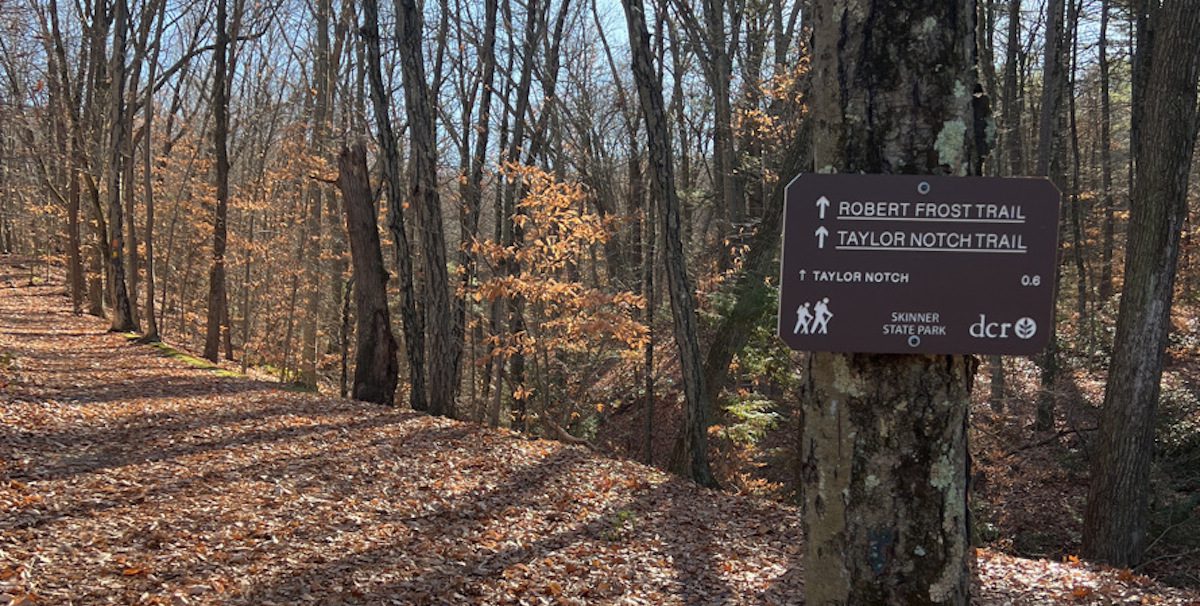 As the Robert Frost Trail (RFT) celebrates its 40th anniversary, this long-distance hiking route in the Connecticut River Valley now officially has a “new beginning.”

The RFT was established in 1982 when the Town of Amherst—and then Amherst Director of Conservation Pete Westover—was inspired to create a trail in honor of the poet, centered on the poet’s Amethyst Brook home.

The original vision for the RFT was a route that extended between Wendell State Forest’s Ranger Station to the north and Rt. 47 in Hadley to the south. The only existing Robert Frost Trail Guide, issued in 2004 by the town of Amherst, describes 14 trail sections between Wendell State Forest and Rt. 116. However, the first section, called “Holyoke Range West,” intended to connect Rt. 47 and Rt. 116 at the Notch Visitors Center, was never officially completed. 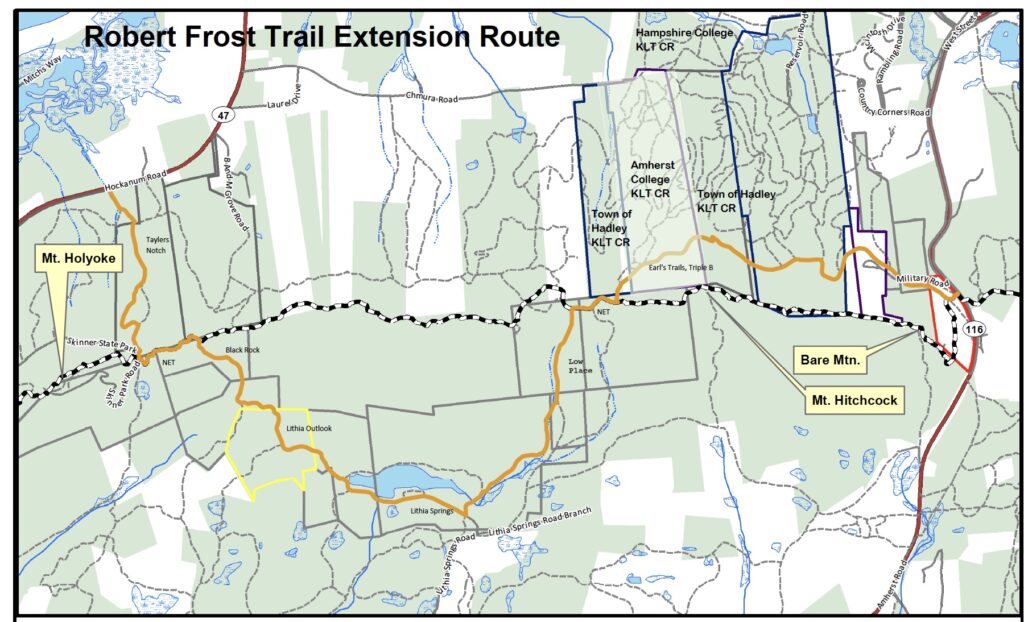 Now, as part of Kestrel’s Robert Frost Trail Revival project, this foundational section of the trail is finally a reality. With support from a foundation grant, our team collaborated with the Department of Conservation and Recreation to map out and formalize a route on existing trails, enabling the RFT to complete the traverse of the Mt. Holyoke Range from Rt. 47 all the way to Bay Rd.

The newly designated route fulfills many aspects of the original vision, passing through Skinner State Park and Mt. Holyoke Range State Park. This section offers a varied and interesting alternative to the famously rugged New England Trail (NET) “Seven Sisters” route along the ridgetop. Departing from the Mountainside Trailhead on Rt. 47, it climbs through Taylors Notch, descends to the lovely Lithia Springs Reservoir, then climbs between the Seven Sisters and Mt. Hitchcock before gently descending again on the northern side of the ridge toward Rt. 116.

The newly designated trail is just under 5 miles long, increasing the total trail length of the RFT from approximately 37 to 42 miles. In November, our stewardship team, assisted by our newly minted RFT Adopters volunteer group, including members of the Friends of Mt. Holyoke Range, completed the installation of 14 new signs and blazing along this new trail section.

Nearly the entire stretch of the new trail section is on permanently conserved state park land owned by Mass. Dept of Conservation & Recreation and 420 acres of land owned by the Town of Hadley, Amherst College, and several private landowners, which have donated conservation restrictions to Kestrel Land Trust. Kestrel has partnered with these landowners to conserve 1,500 acres on the Mount Holyoke Range since 2005. Other sections of the RFT are not as secure, passing through land that has not yet been conserved. Over time, Kestrel’s goal is to work with other willing landowners to protect more of those areas that host the RFT.

While an official map of the newly designated RFT section is still to come, the trail is ready to explore. From the south, park at Rt 47 – Mountainside Trailhead, Skinner State Park parking area (GPS Address: 40-36 Hockanum Rd, Amherst, MA). The route is approximately 5 miles and is moderate to challenging.

Feeling adventurous? You can download a rough map and detailed route description here.

Fundraising Goal Met to Protect South Hadley Lauzier Farm
A Landscape for All Seasons: Virtual Exhibit & Art Sale
Show Your Love for the Land With a Kestrel Hat