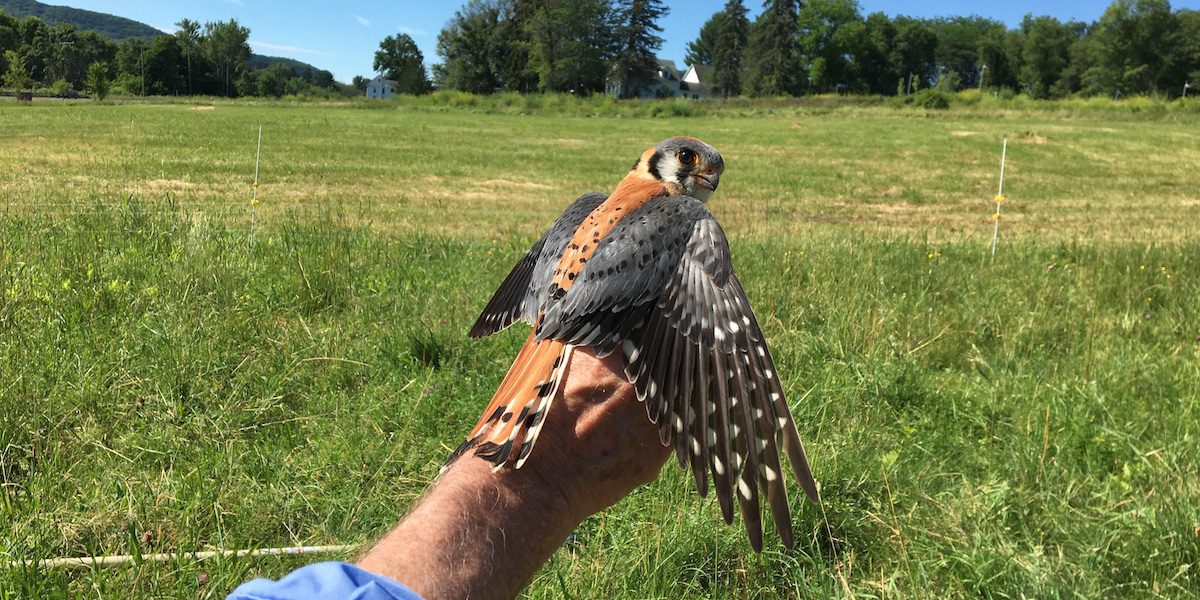 2018 was a busy, varied, and interesting year, with more highs and lows than usual in the American kestrel nest boxes. Here are some numbers, and stories.

Season Summary by the Numbers:

Breeding pairs were confirmed at these boxes:

Box 2, North Maple St., Hadley: This pair went quietly about its business, rarely seen by monitors. They hatched 5 of 5 eggs and surprised us with a clutch of 5 chicks mature enough to band on June 22.

Box 6, Conte Refuge: The Conte Refuge boxes kept monitors busy, trying to figure out how many pairs were nesting among five boxes (4 off Moody Bridge Rd., 1 off Mill Valley Rd.). The results were 1 pair in Box 6 and 1 pair in Box 8. Both females were obliging enough to allow us to band them. In Box 6, the pair hatched 3 of 4 eggs, and the chicks were banded on July 11. This was a new location for Box 6 this year, and the birds took to it immediately.

Box 8, Conte Refuge: The Box 8 pair hatched 5 of 5 eggs. We were lucky enough to band the adult female and all the chicks. This was also a new box location–we moved a box from Mill Valley Rd. that had been frequented by starlings. It seems the kestrels like this location better than Box # 7 in the same field.

Box 14, Huntington Rd., Hadley: This box has been very consistent in hosting kestrel pairs. Both last year and this year, we found banded females in the box. Because they were banded, we could tell they were different birds: last year’s bird was banded as an adult on March 28, 2017 near Pattenburg, NJ, and this year’s bird was banded as a nestling on June 14, 2014 near Watertown, CT. Sadly, though we found 5 healthy chicks in the box on June 21, when we revisited on June 29 we found that all the chicks had been taken by a predator (in conversations with the landowner we suspect weasel). We will fortify the predator guard on this box and hope for better luck next year.

Box 16, Hampshire College: After making a mystery of which Hampshire College box they would occupy, this pair chose Box 16 (west of Rt. 116), in the middle of a sheep pasture. Monitors glimpsed our green field-readable (in theory) band on the female. We found a banded adult female in the box and she turned out to be the adult we had banded at Box 15 (east of Rt. 116) in 2016. On a later visit, we had the opportunity to band the male—our first adult male! Unfortunately, when we visited the box on July 11 to band the chicks we discovered the male inside the box with 5 unhatched eggs that must have been at least 48 days old. Incubation generally takes 26-32 days, so this does not bode well. Anthony will take a final look this week to confirm whether something went awry with this clutch.

Box 18, Montague Rd., Westhampton: This pair also went quietly about its business, hatching 3 of 4 eggs. It would be interesting to know if this is the same pair as last year, which also hatched 3 of 4 eggs. This pair never seems to let us catch them napping in the box! Regardless, the chicks looked great!

Box 19, Park Hill Orchard, Easthampton: Monitors saw an active kestrel pair at this box until the surrounding field was mowed. We checked the box twice to find it empty, with no sign of use. Happily, the landowners kept a sharp eye out and noticed a pair of kestrels nesting under their barn roof. One of our intrepid monitors, Annemarie Granillo, investigated with her camera and confirmed the spot where the kestrels were bringing food to their chicks, who poked their heads out for fly-by meal service.

We know there are at least two of them!

Box 22, Middle St., Amherst: This box provided an instructive comparison of box checks using Anthony’s nifty pole-mounted camera versus examining the chicks in hand. We checked the box using the camera on June 6 and found the adult female on 5 eggs. Obligingly, she allowed us to band her on that day. On June 21, again using the camera, we saw the female kestrel apparently incubating eggs. We chose not to disturb her, but as it turns out, she might have been brooding chicks, not incubating eggs. When we visited the box on July 11, we found two VERY mature chicks, all alone in the box with no siblings in sight. Since there was no sign of predation by any other species, we came to the conclusion that the other chicks had fledged; we probably missed them by a day or two.

Arcadia Wildlife Sanctuary, Easthampton: We partner with MassAudubon’s Arcadia Wildlife Sanctuary, assisting their nest box project by banding chicks for them under Anthony’s permit. This year one of their boxes hosted a breeding pair that hatched 5 of 5 eggs. We banded them with assistance from Arcadia staff on July 5. The chicks were scrappy and ready to take on the world!