All the kestrel nestlings were banded by master bander Anthony Hill in June. We were joined by reporter Greg Saulmon from MassLive who documented the process. See some great photos here.

The 10 kestrel nestlings were fitted with green “field readable” bands on their legs–these will enable identification of the young birds from a distance, allowing information on the movements of these individuals to be collected in the future. For instance, one of last year’s offspring was found in Florida over the winter (alive and well), indicating that at least some of our local population migrates south rather than overwintering here. 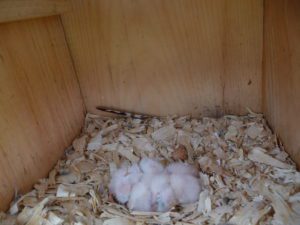 Two boxes were investigated by kestrels but no offspring were produced. One of these was Box 4 on the Conte Refuge at Mill Valley Rd., where a pair was observed mating but no eggs or chicks were observed. And, Box 11 at Crimson & Clover Farm in Northampton, kestrels were seen at the box on two occasions, but the box was ultimately occupied by a pair of Tree Swallows.

With the number of occupied boxes rising to three this year from two last year, we are hopeful that the occupancy rate will continue to rise–especially as two additional boxes definitely attracted the attention of kestrel pairs this year. Even with boxes not yet occupied by kestrels, the information we gathered on non-target species such as bluebirds, swallows, and starlings contributes to the “big picture” researchers are trying to put together regarding kestrels’ breeding status in our state.

Our volunteer monitors made these observations:

We look forward to an even more productive season next year!