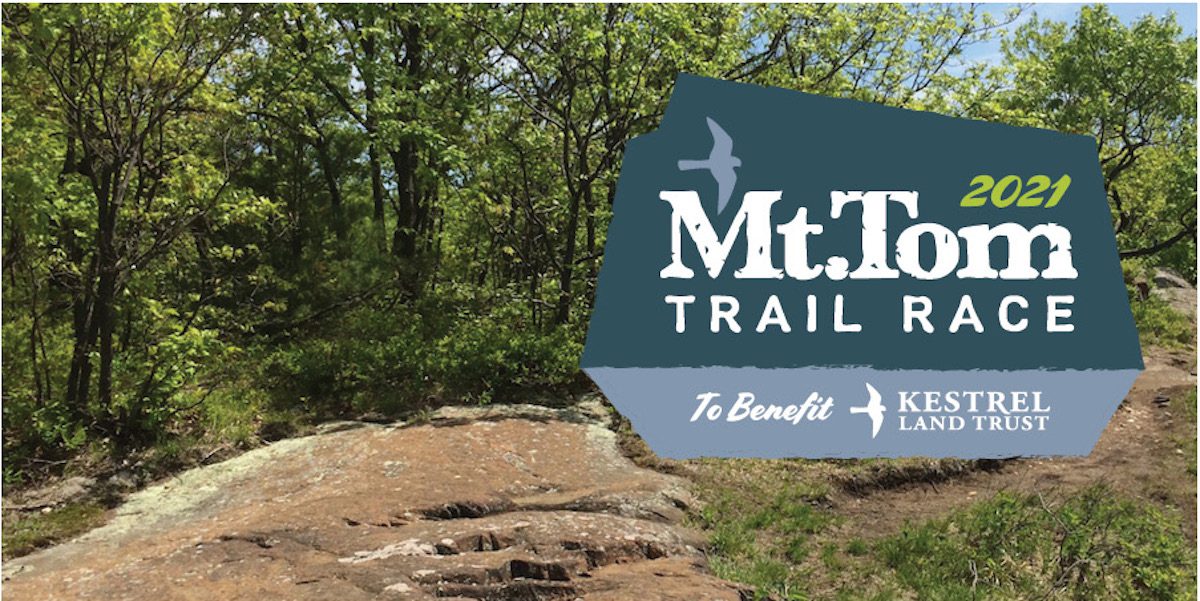 The Mount Tom Range is an iconic part of the landscape in the Connecticut River Valley in Massachusetts. Multiple peaks, rocky cliffs, scenic vistas, and miles of popular recreational trails provide opportunities for everything from rugged hikes to hawk watching to picnicking.

The area’s unique geology also provides critical habitat for wildlife and rare plant communities, making it one of the most important biological refuges in the Commonwealth. However, only a portion of the Mount Tom Range is conserved: much of the land adjacent to the State Reservation in Easthampton, and some in Holyoke, is not permanently protected.

Kestrel Land Trust and its partners, Beast Coast Trail Running LLC and New City Brewery, are pleased to announce the first Mt. Tom Trail Race to benefit Kestrel’s conservation efforts on and around Mount Tom. The event takes place on Saturday, October 23, offering an exciting way to support conservation of and public access for this unique feature in the Valley. The rugged 12-mile race route will take place along trails throughout the Mount Tom State Reservation, straddling Easthampton and Holyoke. The race starts and finishes at Millside Park in Easthampton, next to New City Brewery, which will host post-event refreshments and festivities, including a free pint of local beer in a commemorative pint glass.

The event was the brainchild of Kestrel volunteer Leah Jacobson-Hardy, an avid trail runner who works with race director Amy Rusiecki of Beast Coast Trail Running LLC. They have coordinated dozens of hugely popular races in New England, including the Vermont 100 Endurance Race and the Seven Sisters Trail Race on the Mount Holyoke Range. The first inaugural Mt. Tom Trail Race will support Kestrel Land Trust’s Mount Tom Fund dedicated to enhancing public access on the Mount Tom Range and conserving nearby lands in Easthampton and Holyoke.

“The trails at Mt. Tom are amazing, and it’s an especially popular area for local trail runners, so we’re thrilled to offer the opportunity for runners from across New England to experience this local gem,” said Rusiecki. “Every Beast Coast Trail Race partners with a local non-profit that either preserves land or promotes outdoor athletics. For this race, we’re thrilled to partner with Kestrel Land Trust to help support the important work they do to preserve and maintain the places we love.”

“Every Beast Coast Trail Race partners with a local non-profit that either preserves land or promotes outdoor athletics. For this race, we’re thrilled to partner with Kestrel Land Trust to help support the important work they do to preserve and maintain the places we love.”

Building on the Mount Tom Fund

Kestrel’s Mount Tom Fund was established with a bequest from the late Katherine “Kay” Burnett, also known as the “Trail Lady” for whom the KB Trail on Mt. Tom was named. Kay was known as a skilled trail builder who helped establish miles of trails and build many of the bridges on the Mt. Tom State Reservation.

Burnett’s bequest, along with support from Pascommuck Conservation Trust and other sources, made it possible for Kestrel to purchase land in Easthampton in partnership with the City to expand public access to Mt. Tom in 2019. Kestrel and the City each purchased two adjoining parcels known as the Little Mountain Parcel and the Picnic Parcel, totaling 23 acres. The area historically served as an entrance to the Eyrie House Hotel on Mt. Nonotuck Peak in the 1800’s and currently functions as an unofficial trailhead of the New England National Scenic Trail. The new Mt. Tom North Trailhead Park is Easthampton’s first secure public access to the State Reservation and the New England Scenic Trail on the northern end of the mountain. It will be managed as a single conservation and recreation area with the City of Easthampton and Kestrel acting as partners.

The design phase of the project was recently completed after receiving input about the community’s vision for the new park and trailhead. A parking area is currently being installed along East Street, from which a short, fully accessible trail will lead to a gathering area and a scenic overlook on the land historically known as the “Picnic Parcel.” Finally, a short loop trail on the Kestrel parcel is being created, providing access to the New England National Scenic Trail and Mt. Nonotuck.

Kestrel Land Trust is also supporting the City of Easthampton’s effort to conserve 5 acres of woodland at the end of Reservation Road. This small area of private land has served as a neighborhood access point, and was at risk of being lost to expanded housing development. Earlier this year, a petition was signed by over 1,000 people (both Easthampton residents and beyond) identifying the importance of preserving the land for its habitat value as well as passive recreation.

The City has received State grant funding to help purchase the property, but still needs local Community Preservation Act funds to complete the project. Kestrel plans to hold a Conservation Restriction over the property, which will be conserved for its priority wildlife habitat for endangered species.

Kestrel’s Conservation Director, Mark Wamsley said, “For many years members of the local community have reached out to Kestrel, as well as to other conservation groups and agencies, seeking our help in protecting these remaining, privately owned acres on the boundary of Mt. Tom State Reservation. This area adjacent to Mt. Tom is critically important for habitat protection, and has served as a traditional, neighborhood access point to Mt. Tom for passive recreation.”

“Mt. Tom and the Mount Holyoke Range are primary Conservation Focus Areas for Kestrel due to their exceptional and extensive natural resources. This is a commitment we share with the City of Easthampton, whose residents identified this iconic landscape, and the protection of these key properties.”

“Mt. Tom and the Mount Holyoke Range are primary Conservation Focus Areas for Kestrel due to their exceptional and extensive natural resources. This is a commitment we share with the City of Easthampton, whose residents identified this iconic landscape, and the protection of these key properties, as a top priority in the City’s recently approved 2021 Open Space and Recreation Plan. This project represents the City’s forward-thinking approach to protect sensitive areas while focusing development into its downtown,” said Wamsley.

The Mount Tom Trail Race will also support Kestrel’s partnership with the City of Holyoke to conserve and restore nearby Anniversary Hill Park, which is an extension of the same geological feature underlying Mount Tom. Last year, Kestrel purchased 14 acres near the historic Scott Tower, which will be transferred to the City once funding has been secured. In the meantime, the City of Holyoke and Kestrel are collecting input from the community as part of the process of re-imagining and restoring this once grand forested park for public enjoyment. 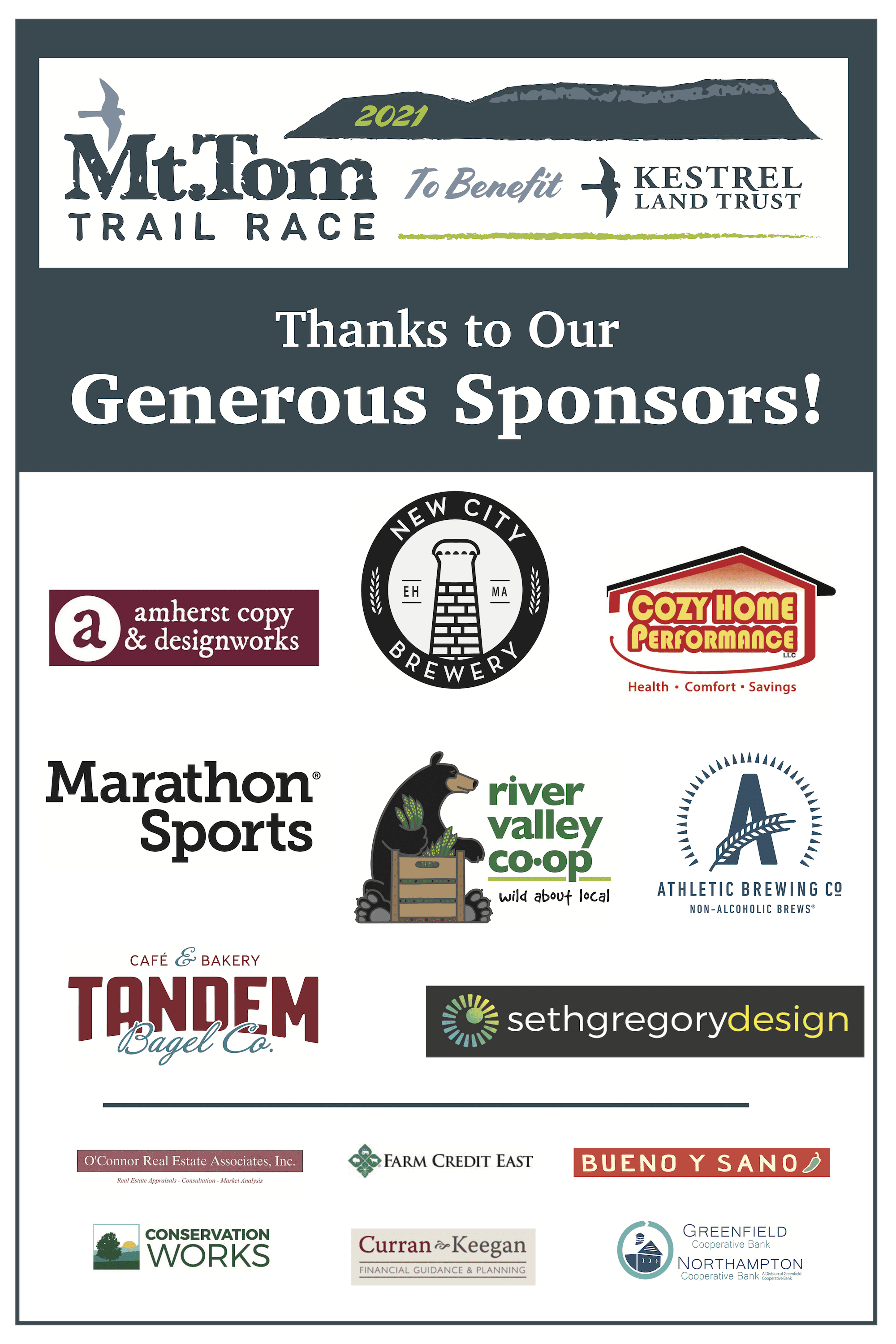