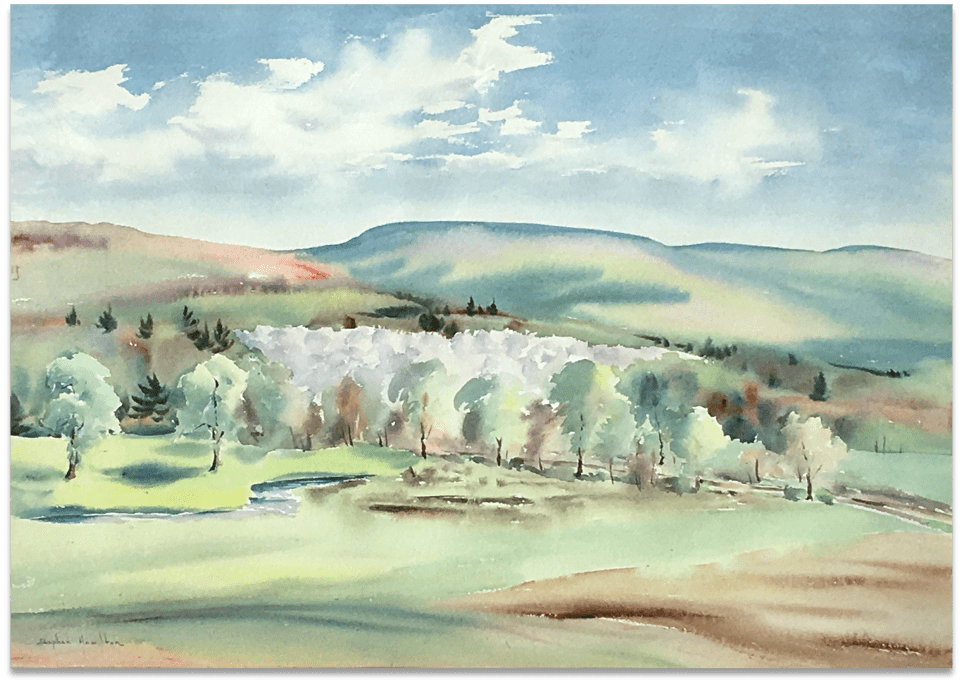 I feel incredibly fortunate to have been a kid living on North East Street in the early 1960’s. Then, sleepy Amherst was a wonderland of a past slowly fading away. We moved into a house on North East Street house in 1962 and took over from the original owner who occupied the house since 1855. Inside was a fascinating accumulation of a century of living. I distinctly remember huge trunks in the attic stuffed with swords, fancy black Victorian dresses and “Ski Yosemite” posters from the 1930’s. Our front yard featured an impressive 100-year-old Maple tree that adorned this sturdy 19th century two-story red brick farm house. This grand gnarled treasure was home base for countless games of hide-and-seek held during summer evenings. Accompanied by a chorus of crickets, our excited laughter rang out into the neighborhood during games. Attached to our house was a three-floor weathered wooden hay barn filled with 1920s cars, worn wooden wagons and terrifying large gray spiders.

Around the corner on Main Street were a few elaborate, out-of-place Victorian houses with mansard roofs bordered by gaudy, pointy iron fences with creaky gates. They were home to rarely seen mysterious elderly women rumored to be “witches” who cautiously called out, “Who is it?” when we rang the doorbell on Halloween. Losing our courage we immediately ran off without responding. On spring mornings I picked tiny, surprisingly sweet wild strawberries found along the sidewalk on the way to school. Summer was blackberry hunting season. Fall was a burst of wild color and playing in huge piles of leaves. In winter, the Fort River overflowed, flooded the lower fields and froze. We ice-skated on an endless rink.

My backyard bordered the confluence of Fort River and Amethyst Brook, which peeked out from the edge of the forest covering Pelham Hills. Over the span of several years, I went on a tremendously exciting adventure, to go deeper and deeper into the hills. The thick forest had a distinctive sound. It was a hushed, quiet place punctuated with the distant call of a Ringed-Neck Pheasant, a crow or two chattering in tree tops, rustling leaves and gurgling water.

I have stored away in my mind an unforgettable view. It is this deep pool of slow moving water book-ended by two, old, mossy white ash trees. About fifty yards apart each tree was precariously perched on the pool’s edge. Each year these ancient sentinels leaned slightly more into the pool as flowing water washed away soil holding them upright. During summer, the banks of this pool were crowned with patches of clover that served up large, tasty pink blossoms. The clover was woven into a broad carpet of tall green grass that covered the banks right down to the water’s edge. Caught in a breeze, the long, slender curved leaves dipped into the water and then withdraw holding a shiny drop of water on their tips. In the fall, vivid, colorful leaves bumped along the brook’s bottom floating over smooth stones polished by water, movement and time. And, every once and a while a huge, wily trout flashed by sending a lightning bolt of excitement through me. I never caught a single one. This unforgettable pool was one many stops along what we called “Little Brook” not knowing its real name is Amethyst Brook. As an 8 year-old this beautiful place was irresistible.

Over the last almost 60 years, I have realized more and more just how lucky I am to have had this childhood experience. Although today I live in the Southwest, the Pelham Hills remain a precious, lifelong companion. More than a memory, they are an indelible part of who I am. I share this story because I am gravely concerned about how extensively the natural world is suffering and rapidly being lost. So, I am compelled to no longer stand on the sidelines and take action. Very impressed with the Kestrel Land Trust’s mission to conserve and care for land, I want to be a part of this important work. Right now, I am helping Kestrel purchase and conserve land in perpetuity. And, in the future when I’m gone, my estate will help Kestrel continue their vitally important work. I share these childhood stories along with my commitment to land conservation to hopefully inspire others to help Kestrel protect our beautiful places.

The painting was made by Stephen Hamilton, also of Amherst.