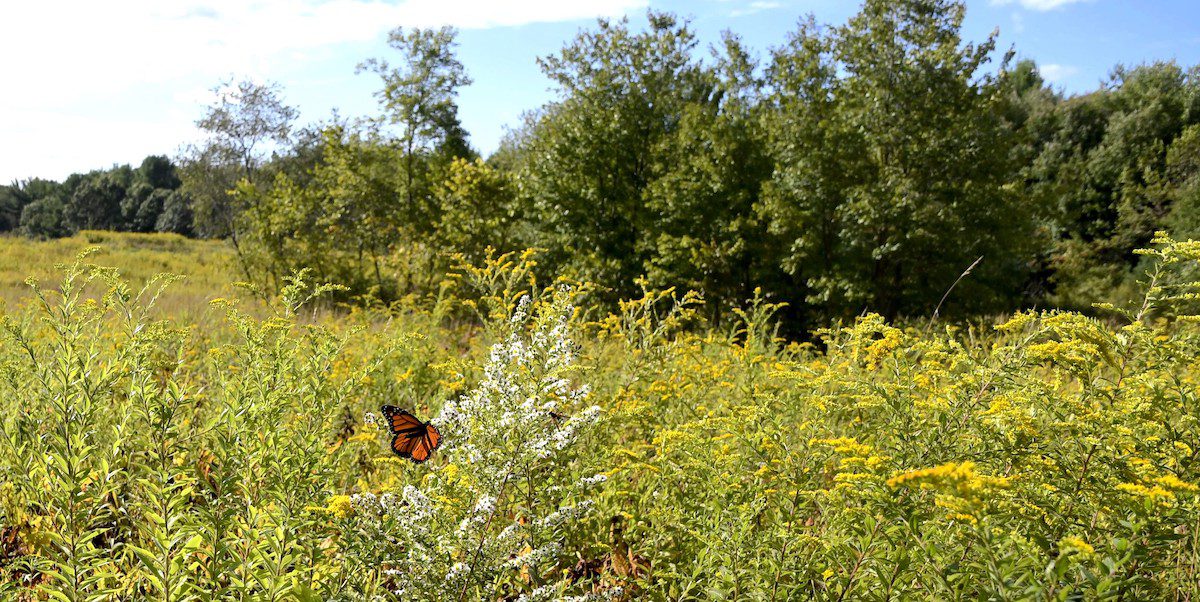 When Barbara Walvoord and her wife Sharon Grace first moved to the Lathrop Community (a Kendal affiliate) in 2014, they started to explore the land around the Easthampton senior-living campus. “There were forests, and meadows and streams and vernal pools, and we thought, ‘Wow, this is beautiful.’ We began to realize this was an extremely important piece of land.”

It wasn’t long before Barbara and Sharon helped to establish a Land Conservation Committee with other volunteer residents, and Barbara took a leadership role. In part, because of their passion for the land—and their diligence in learning about it—the place they came to love has been permanently conserved.

A 78-acre matrix of woods, meadows, and streams on the 175-acre campus was permanently protected this spring with a Conservation Restriction (CR) held by Kestrel. It’s the latest piece in a long-term collaborative effort to conserve lands around Park Hill in Easthampton.

Many Voices, Many Hands Protected the Land
This project is an example of what’s known as “mitigation” conservation, in which developers are required by the city or town to conserve land in compensation for land that they disturb or build on. It’s a land-use planning tool that municipalities can use to balance development needs with protection of natural resources.

In 1996, the nonprofit Lathrop Community acquired land to create the Easthampton senior-living facility. The permit from the City called for a portion of the campus to be put into conservation. Years later, when Lathrop management was considering options for the land’s future, they began working with the City on the required conservation project.

Many passionate Lathrop residents provided their well-informed input as the CR document was drafted, collectively spending hundreds of hours on the project. The CR even highlights wildlife habitat that was significantly improved by the residents’ successful clearing of invasive plants from 50 acres of now conserved woods.

“We understand the relationship between the land on which our homes are built and the conserved land as one ecosystem that must be managed with care for all living things.”

Kamala Brush, Vice President of the Easthampton Residents’ Association, said the effort “brought together Lathrop residents, management, and board, public officials, and Kestrel … in a shared commitment to conservation.” Barbara said, “Kestrel was our choice to hold the CR. Every interaction with Kestrel’s staff has been informative, warm, and collaborative. We are very lucky to be working with Kestrel.”

The newly conserved private land on the campus includes 20 acres of fields federally classified as prime farmland, and farmland of statewide importance. The Bassett Brook crosses through the area, which includes several acres of wetlands and multiple certified vernal pools. It also supports the local aquifer, providing drinking water for the wider community, and protects valuable wildlife corridors and habitat for species like salamanders, foxes, and likely even box turtles.

“We understand the relationship between the land on which our homes are built and the conserved land as one ecosystem that must be managed with care for all living things,” Barbara said.