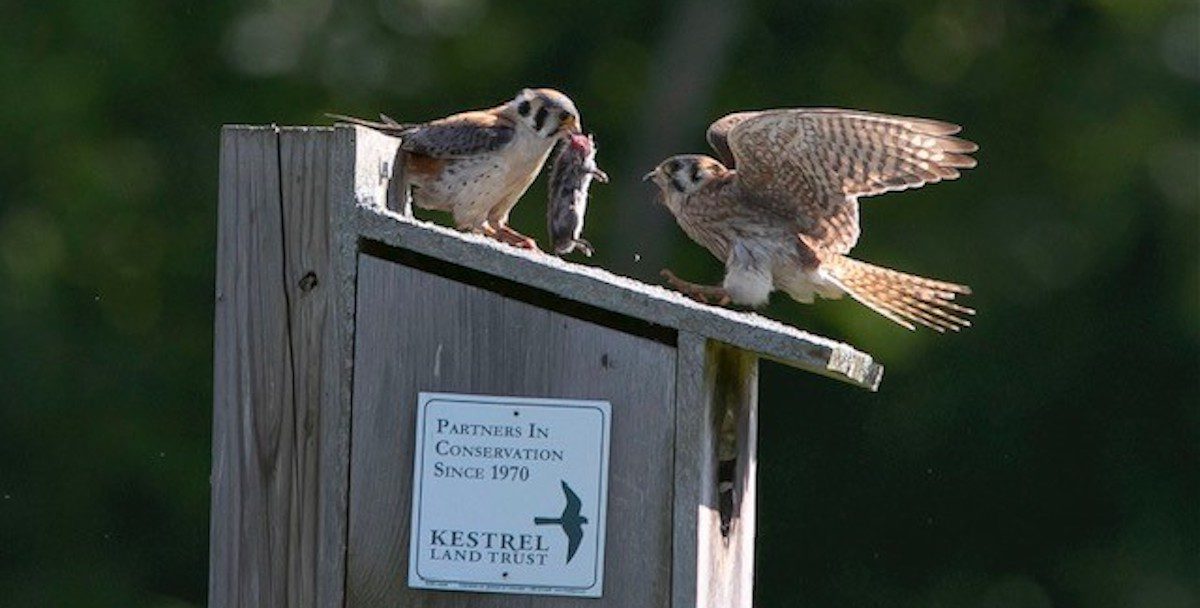 The 10th season of our Kestrel Nest Box project “flew by” for our Stewardship Director, Chris Volonte, who shared the following report with us. With the help of many trained volunteers, we observed 24 of our nest boxes and collaborated with Arcadia Wildlife Sanctuary to help observe 4 boxes at their sanctuary. Read on to hear some surprising results from this season!

Based on our volunteer monitor reports, kestrels were seen on or near 16 out of 24 boxes. Based on direct box checks, 11 boxes were used by breeding pairs of kestrels, our 3rd highest occupancy rate (38% of all boxes).

This year, there were two failed nests and our box occupancy rate was lower than the last two years. Even so, this was a good year for our kestrel pairs. Of 56 eggs laid, 44 hatched (79% of all eggs), compared to 84% for the project’s overall average hatching rate. Of the 44 chicks, 42 were known to survive until banding. That is a survival rate of 95% for the chicks. (Nice work, kestrel parents!) Overall, the average survival rate of chicks in our boxes is 94%.

In all, we banded 42 chicks hatched in KLT boxes, tying last year’s second-highest number for the project. Additionally, at Arcadia Wildlife Sanctuary, 3 of 4 boxes were occupied, 2 successfully, and we banded 9 chicks with help from Arcadia staff.

Scroll down to the end of the post for a Season at a Glance table. A more detailed table showing findings at each of the boxes can be found here. Note that we’ve listed the field readable band numbers used. If you are a birder, please keep an eye out for kestrels sporting these large green bands, and be sure let us know if you spot one! Look for a photo of the green field-readable band and lots of other photos in that same link: Thanks to everyone who contributed photography!

Radio Tagging. This year KLT assisted MA state ornithologist, Andrew Vitz, who is involved in a larger research effort to determine the movements of American Kestrels using the Motus Wildlife Tracking System, an international collaborative research network that uses a coordinated automated radio telemetry array to track the movement and behavior of small flying animals. Researchers use tiny harnesses to fit small lightweight radio-transmitters on animals such as birds, bats and large insects. Their signal is detected by receivers scattered around the landscape. The data from these receivers is then centralized, filtered, analyzed, archived, and disseminated to all researchers and organizations in the network. Learm more about MOTUS here and click around on the other tabs of this website.

To facilitate the banding and tagging of adult kestrels in our region, Anthony Hill, our master bander, and Grace Goodwin-Boyd, our AmeriCorps service member, repeatedly visited a select number of occupied boxes with the pole camera and reported their findings to Andrew and a UMass researcher so they could attempt a tagging session. In the end, they couldn’t make it out to any KLT boxes. However, Arcadia adopted our pole camera technique for efficient box checks, and a male kestrel was fitted with a

radio tag at Arcadia in late June. We’ll let you know if we hear anything about this bird’s movements!

1 Box, 8 Eggs. Another first this year was seeing 8 eggs in one nest box. Typical kestrel clutches are 4 or 5 eggs, so this really caught our attention and we wondered what would happen. I hoped that only 5 eggs would hatch, as I doubted the kestrel pair would be able to succeed in feeding eight hungry chicks. Turns out that’s exactly what happened—we banded five healthy chicks at Box 7 and found 3 unhatched eggs. This outcome may not be typical. I ran across a 2021 peer-reviewed article online on this topic, here is the abstract:

“The clutch size of the American Kestrel (Falco sparverius) has been well studied across a range of latitudes and habitats and typically is 4 or 5 eggs. Neither polygyny nor brood parasitism has been reported for the species. I report here 3 instances of supernormal clutches, of 8 or 9 eggs, documented in kestrel nest boxes in north-central Florida and discuss 4 possible explanations for these observations. In 2 nests only 1 egg hatched, and in 1 nest none of the eggs hatched. Although I was unable to make a conclusive finding about the cause for supernormal clutches, it is likely that they were laid by more than 1 female, either cooperatively or non-cooperatively.” (Karl E. Miller “Supernormal clutches of American Kestrels (Falco sparverius) in peninsular Florida,” The Wilson Journal of Ornithology 132(2), 438-441, (5 February 2021).

The “R” Tag Bird Returns. You may recall that in 2020, at Quonquont Farm, an adult female with a distinctive wing tag labeled “R” was observed via the nestbox cam in Box 23 near the farm buildings. This bird was banded in New Jersey in 2018. She was featured in the many “nest-cam” photos captured by Allison Bell of the activities in this box as the pair raised 5 chicks in 2020 (view a video here).

Then in 2021, Box 23 was occupied by a different female, and her 4 eggs never hatched. Meantime, the “R” tag bird was found using Box 24 in a quiet back field at Quonquont. She laid 5 eggs, 4 of which hatched. This was the first year Box 24 was used following its installation in 2019.

This year, the “R” tag female returned, selecting another box at Quonquont Farm, Box 25 in the remotest field yet. Ever the pioneer, this female was the first to use Box 25 following its 2019 installation. She laid 5 eggs. They all hatched and the chicks were banded. This kestrel has now sampled every box at Quonquont Farm and raised 3 clutches of chicks. We can’t wait to see what she does next!

Two Breeding Pairs at Quonquont Farm. Fortunately, this year Box 24 at Quonquont was selected by a different female kestrel, who also raised a clutch of 5 chicks. That makes this the first year that more than one of Quonquont’s 3 boxes was used by kestrels!

You can see many more photos and details here!

As always, many thanks to all our box hosts and volunteers for your support of this project. 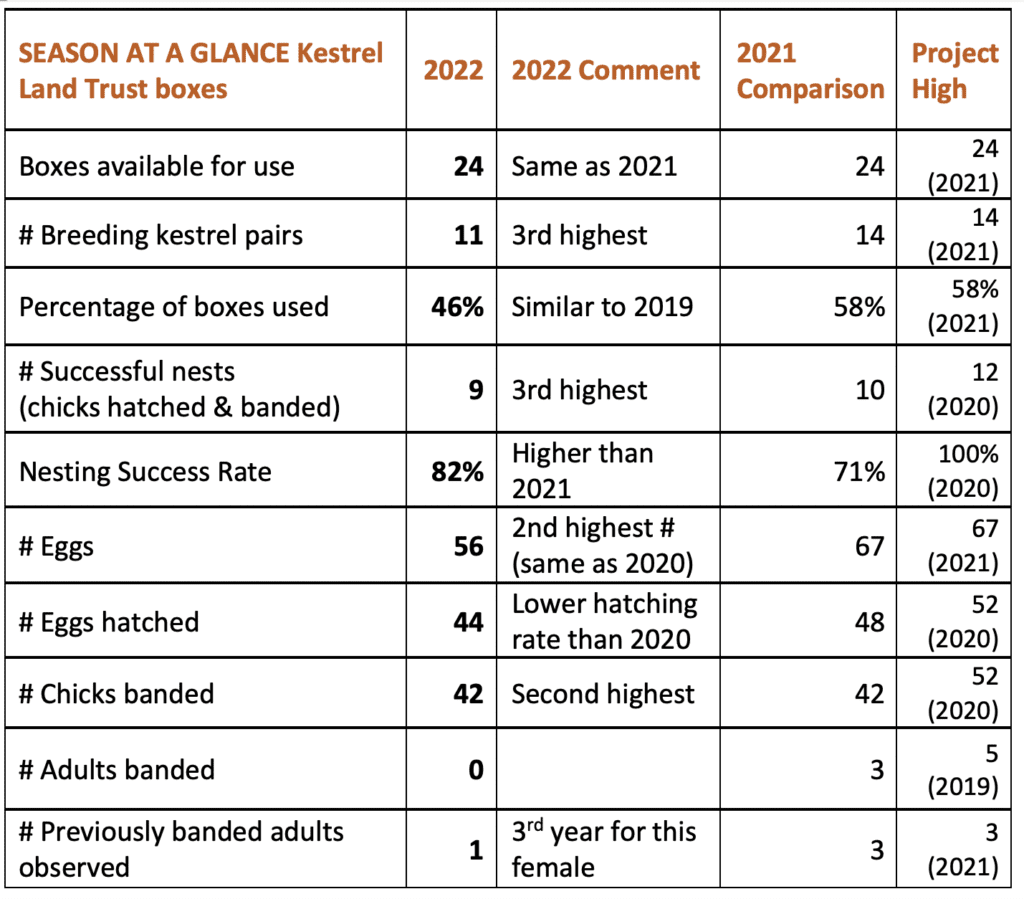