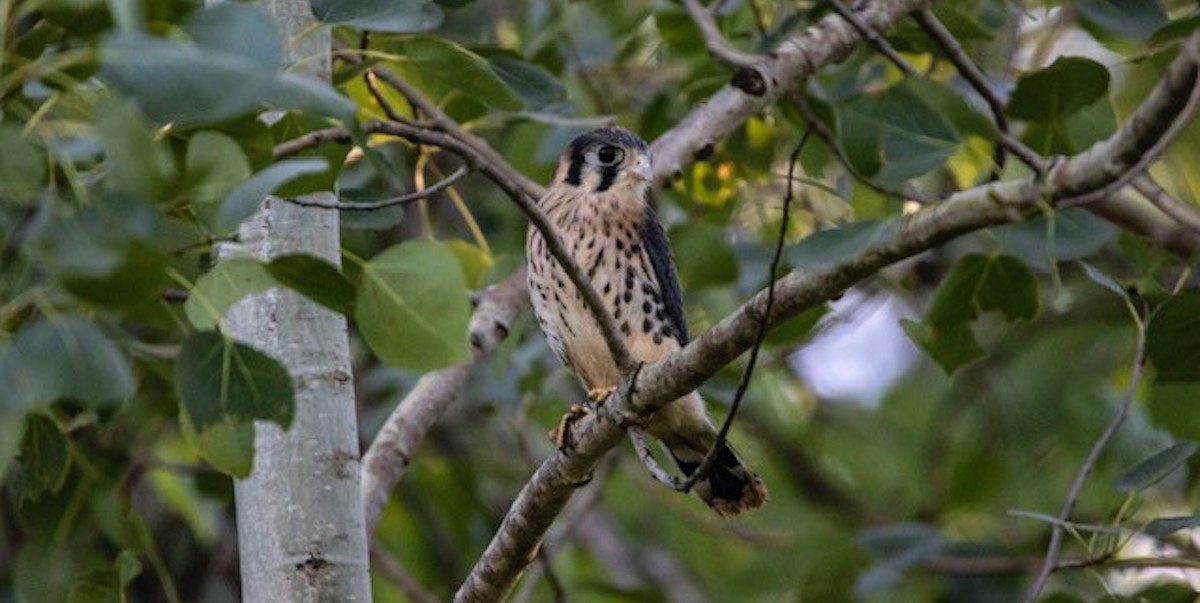 It was a very busy year for the kestrel nest box project, with our highest number of boxes to manage – 24 Kestrel Land Trust boxes, plus an additional 6 boxes we helped check at Arcadia Wildlife Sanctuary.

The birds kept us busy checking and re-checking boxes this year. Occupied boxes diverged into “early” and “late” groups, with some chicks hatching and ready to band by the second week of June, others not ready until the first week of July, and some ultimately not hatching at all. 2021 was a mix of good news and bad news, highs and lows.

Based on our volunteer monitor reports, kestrels were seen on or near 17 out of 24 boxes. Based on direct box checks, a project high of 14 boxes were used by kestrels, with an occupancy rate that matches last year’s (58% of all boxes). 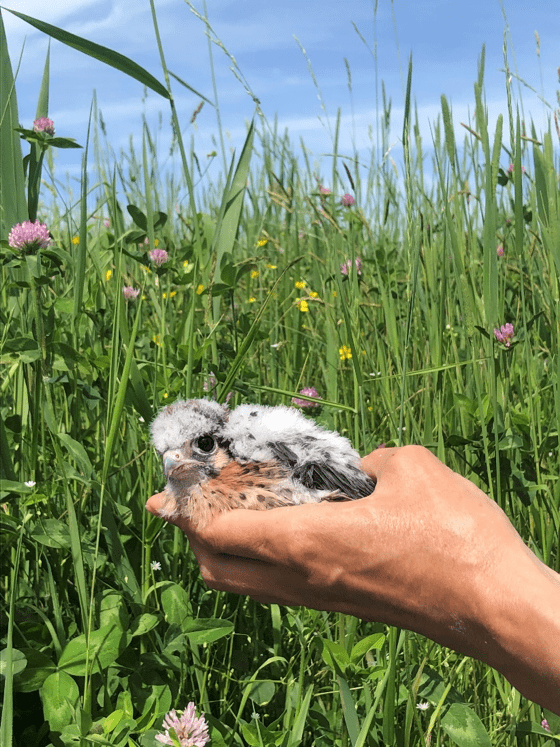 The good news is that we banded 42 chicks hatched in KLT boxes, the second-highest number for the project. We also banded 3 adult females and observed 3 previously banded females at our boxes—a project first!

At Arcadia Wildlife Sanctuary, 3 of 6 boxes were occupied, 2 successfully, and we banded 9 chicks and 1 adult female.

There were several “firsts” this year. Some have been mentioned already. Here are a few more:

SIGNS OF A CHALLENGING YEAR

As mentioned above, in 4 of the occupied boxes this year the eggs did not hatch (Box 2A, 6, 13, 23). Of those 4, 3 were mostly lacking shavings (details below). We’re reasonably certain we placed shavings in all the boxes when we prepped them. Our understanding is that kestrels do not remove shavings (nor do they bring in nesting material). European starlings are known to remove nesting material from cavity nests, including shavings, so starlings are on our list of possible culprits. We wonder whether the lack of shavings made it difficult for the females to properly incubate, and/or the eggs rolled too frequently, causing “addling.” We plan to start carrying shavings with us on box checks so we can replace any that go missing in an occupied box. 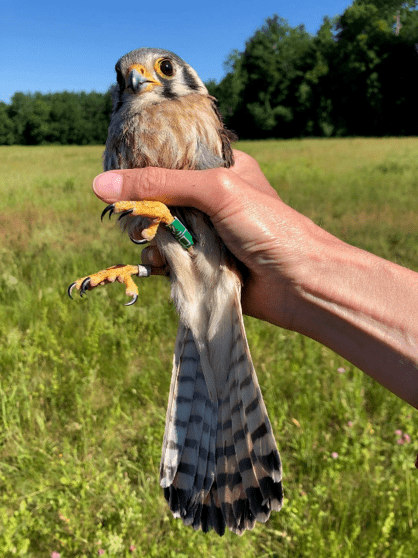 Box 13 at Hartsbrook School was one of the boxes where eggs did not hatch. We observed two eggs in the box, a low number. Later in the season, one egg disappeared. Potential nest predators include snake. Interestingly, this is one of the boxes that had a new and improved predator guard installed this year, though there is an as-yet-unfilled small gap between the guard and the post that a snake might have gotten through.

As mentioned above, 10 boxes were successful this year, with eggs laid and chicks surviving until banding. In 6 of these 10 boxes, there were signs of challenges. Boxes 14, 19, 24 each had one unhatched egg. Boxes 3, 17 and 22 had more complicated stories. Our observations indicate that chicks (or possibly eggs) went missing in these boxes (6 total).

In Box 17 at Hampshire College, we photographed 3 downy chicks with the pole camera. They along with the parents disappeared before fledging time. When we visited the box to band chicks, it was empty and very clean, indicating that use ceased earlier rather than later following hatching, which suggests predation. We did not install an improved predator guard on this box, because our design does not work on this post. In Box 22 in Amherst, we observed 5 eggs. We later banded 2 chicks and found 1 unhatched egg in the box, leaving 2 eggs unaccounted for. The missing eggs suggest either egg or chick predation. In Box 3 at Amherst College, we originally observed 5 eggs. Later, we banded 4 chicks and found no sign of the fifth egg. This box does have a new predator guard.

A potential source of the challenges faced by kestrels this year is lack of prey availability. Fluctuations in prey abundance is a regular challenge for raptors. One clue we received was the observation by volunteer monitors that the kestrels at Park Hill Orchard seemed to be capturing many sparrows. We would typically think of kestrels preferring rodent prey (they also eat many grasshoppers when abundant). It’s possible that the predation of small birds at Park Hill was an indication of low numbers in preferred prey. We did note that this was a likely year for a drop in rodent numbers, which may have peaked in 2020 following a big mast event in fall of 2019.

As always, many thanks to all our box hosts and volunteers for your support of this project!