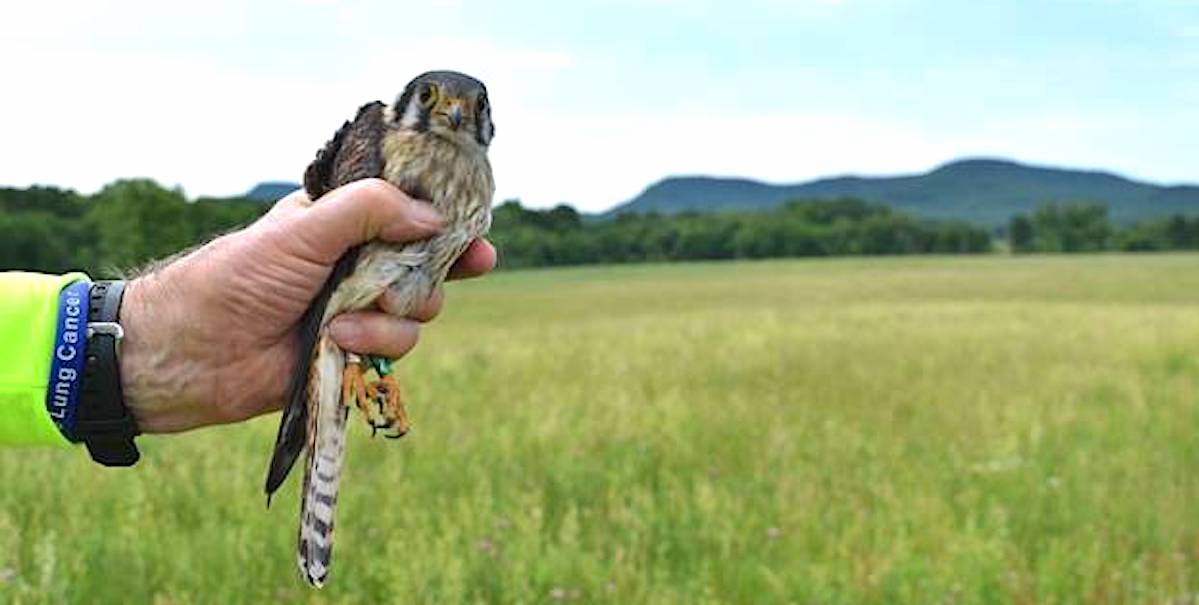 Our 8th year was an unprecedented season for our nest boxes, with the highest number of boxes hosting kestrels since we started the project. This year, twice as many boxes (12) were successfully occupied as in any previous year!

Including 3 new boxes joining the project at Quonquont Farm in Whately, 21 boxes were available for use by kestrels this year. Based on our volunteers’ monitoring reports, kestrels were seen on or near 17 boxes (81%). Based on direct box checks, 12 boxes (57% of all available boxes) were successfully occupied by kestrel pairs.

Every year we track successful versus unsuccessful boxes – successful meaning eggs laid and chicks hatched and banded. This year, 100% of the occupied boxes were successful. 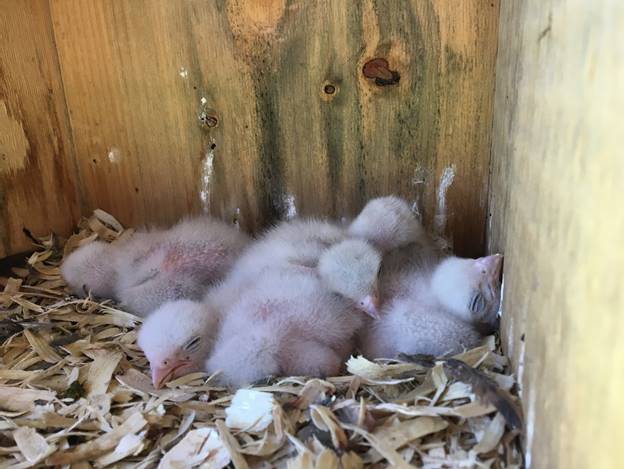 European starlings attempted to use 6 boxes (29%), and 2 boxes (10%) saw no apparent use by any species. One box, at Quonquont Farm, hosted an Eastern Bluebird pair.

To minimize contact and maximize social distancing, we did fewer pole camera checks this year and tried to time our visits when chicks would be ready to band. Our plan worked well — we banded two boxes of chicks on our first day of pole camera checks (6/9). Based on what we saw, we had a very full banding day a couple of weeks later (6/26), with 28 chicks banded at 6 boxes. Planning around the rain gave us two partial days of banding (6/30 and 7/3), which got the job done! Watch this video about the kestrel banding process at Quonquont Farm this year. 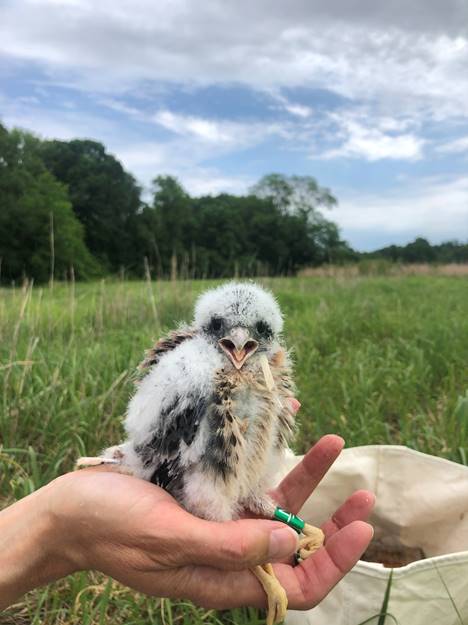 A Year of “Firsts”

As you might guess, several boxes occupied this year have never before been used by kestrels. This includes the box at Crimson & Clover Farm, the Hampshire College box near the Red Barn, and our newly installed box at UMass Farm, which was set up as an alternate to a box across the street that we closed following the 2018 season. We were sad to see the alternate box unoccupied last year, but we were thrilled to see kestrels back in the neighborhood this year!

Lastly, thanks to Allison Bell at Quonquont Farm, we had the project’s first active nest box camera going this year, in one of three boxes hosted by Quonquont Farm. The camera gave Allison constant data to share, as well as beautiful images of the kestrel family carrying out their daily activities (see below). Many thanks to proud “chick auntie” Allison for setting up and monitoring the camera, combing through all the imagery, and sharing photos with us. Watch a video she created of how the chicks grow over a few months!

Thank You, Volunteers and Hosts!

Many thanks and kudos also to our volunteer box monitors, many of whom have patiently and steadfastly watched unused boxes for years before being rewarded with kestrels. It certainly shows that we can’t read the minds of these birds, and they will come when they are ready. (That doesn’t stop us from trying to figure out the best box locations to entice them!) Many volunteers also work very hard each year to determine what is happening at their boxes. This can be challenging, since the birds can be surprisingly stealthy, and in some locations, such as Conte Refuge and Hampshire College, several boxes clustered in the same area make it difficult to tell which boxes are actually being used by the kestrels present. Lastly, many volunteers took photos of the adult kestrels in action this year and graciously shared them with us.

And as always, many thanks to our box hosts, who patiently assist with the kestrels’ needs (and ours) every year. We are grateful to them for inviting this beautiful native bird to share their land. All of these efforts are contributing to the species’ continued success and survival in our region!