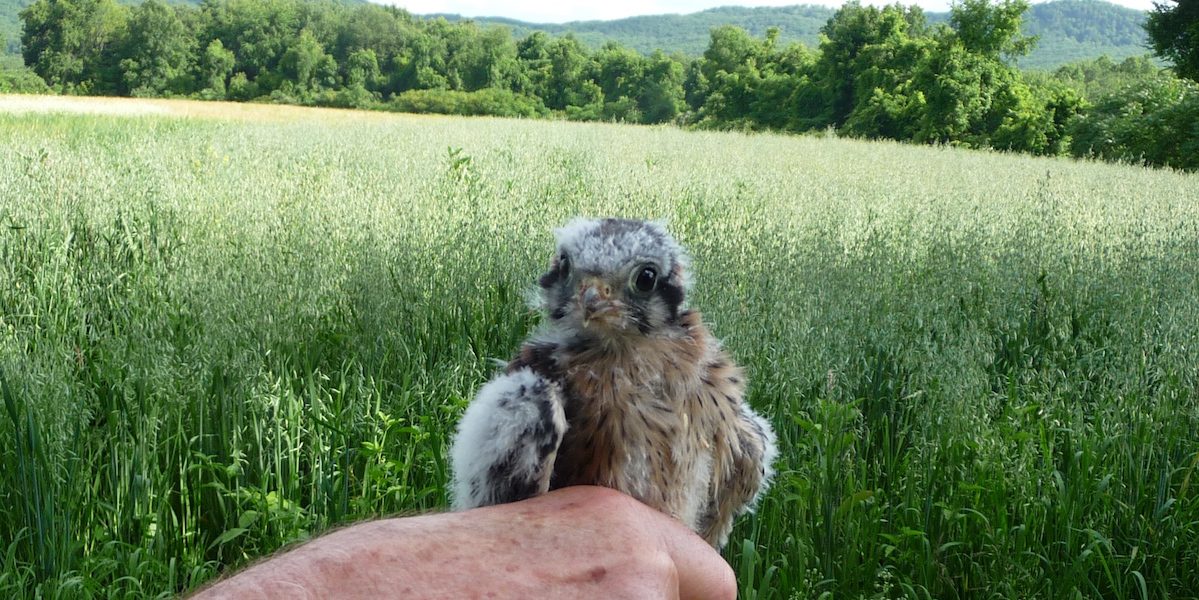 Kestrel adults were seen near 14 of the 18 boxes (including both occupied and unoccupied boxes). One box (Box 7 at the Conte Refuge) was unsuccessfully occupied – 4 eggs were laid but 3 disappeared and the third was abandoned. One box (Box 11 at Crimson & Clover Farm) hosted tree swallows for the fourth year in a row – though an adult female kestrel was seen perching on the box early in the season.

This season also saw the implementation of Board member Anthony Hill’s pole-mounted nest-box camera, which enabled us to peek inside the boxes with minimal disturbance to potential occupants. This device greatly enhanced our ability to quickly check boxes, and we will definitely be using it next year!

We also spent a full day checking occupied boxes with Tufts graduate student Matt Kamm, who is researching American kestrel breeding habitat. We thank Matt and his assistants for a great day learning to age chicks by feather development.

Lastly, this year the Kestrel Nest Box project was visited by reporter Dave Fraser, who produced a segment that aired on WGBY’s Connecting Point series on July 5.  In case you missed it, you can watch it here. Dave also filmed our banding activities on August 1. Many thanks to Dave for doing such a great job!

Sorry, no pictures of chicks this time! It was a dark and rainy morning when we banded this group, but thanks to the graciousness of the box hosts, we were able to transport the chicks in a covered bucket to a spacious outdoor porch for banding. The birds stayed nice and dry. We did not.

Many thanks to all of our volunteers for their contributions to this effort to support and protect this beautiful little falcon species. See you next year!