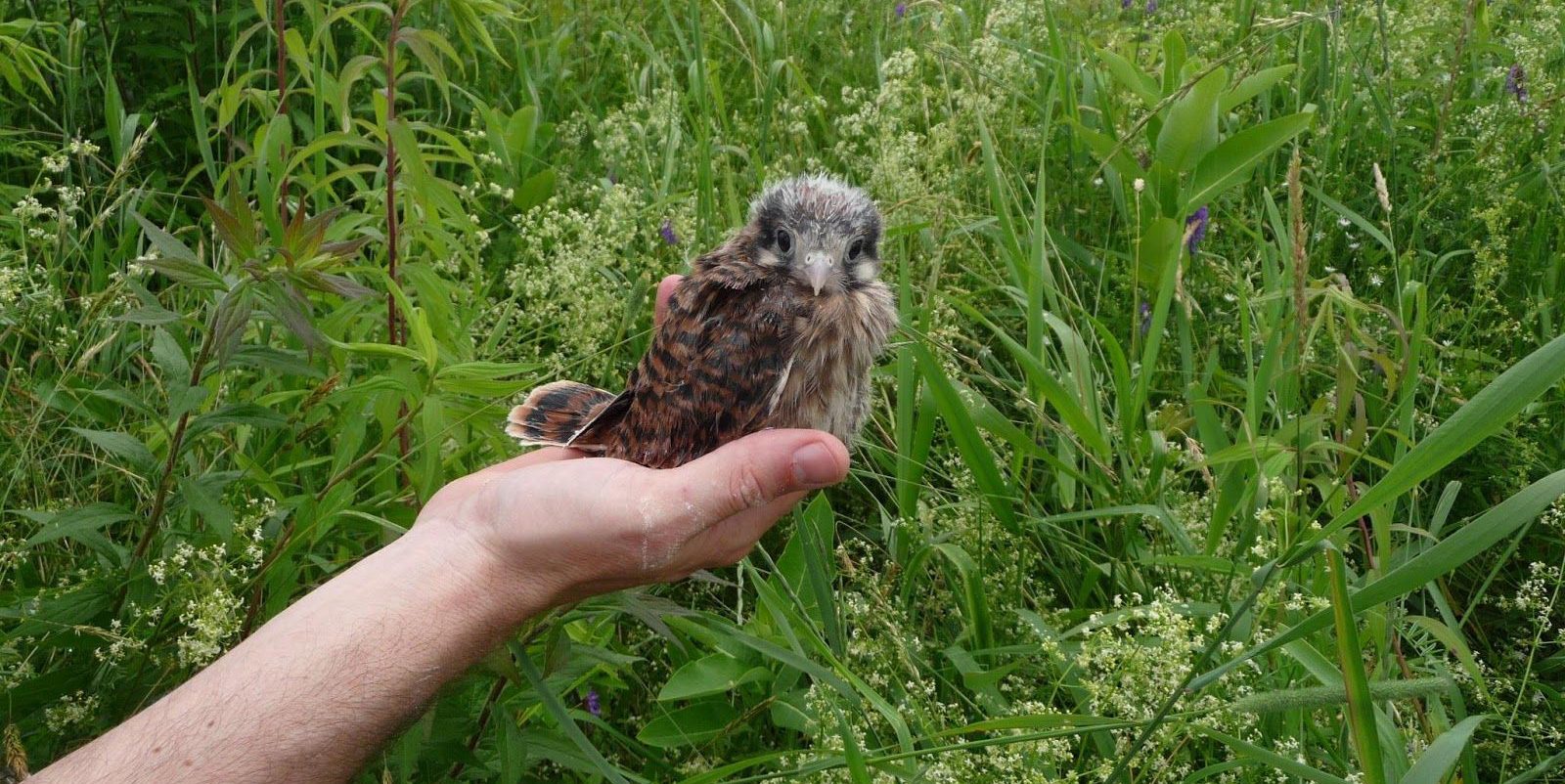 The 2016 American kestrel breeding season had its ups and downs. In some ways, it was better than last year, with many more chicks surviving. But they still had their challenges.

Here is the summary from Chris Volonte, Stewardship Manager at Kestrel Land Trust:

These numbers contrast with last year, when 21 eggs dwindled to 11 surviving chicks during a tough breeding season following the frigid, snow-packed winter of 2014-15.

Another contrast was timing.  Last year, egg laying and incubation began 2-3 weeks later than we had observed in previous seasons.  In 2015, we banded our first chick on June 30 and our last chick on July 10. This year, we completed our banding on June 27, three days before we even started that process last year.

In terms of nesting success, 2016 resembled our first two years, which each yielded 10 eggs and 10 healthy chicks (2 boxes occupied each year). One big exception to the resemblance is that we DOUBLED the number of chicks this year to 20, with four breeding pairs producing five chicks apiece (6 male and 14 female chicks).

While last year’s results gave us a solid reminder of the challenges faced by birds and other wildlife, this year also hinted at the challenges they face. Our volunteers observed nest site competition between kestrels and European starlings. The kestrels held their own this year, which is a hopeful sign, but starlings are clearly a factor that kestrels in our area need to contend with.

This is also the first year that our nest box on North Maple St. in Hadley did not host a successful nest. The kestrel pair was observed carrying out normal breeding activity at the box during the first two weeks of April, but after that, no further sightings were reported of the female, though the male was seen a few times. Our box check on June 3 revealed no evidence of nesting. It appears that the female may have met with misfortune, leaving the male to seek a new mate with whom to share his prime real estate.  We left the box open in case he succeeded and made a late-season nesting attempt.

However, there is a lot of good news to focus on this season, including:

A recently installed box was occupied for the first time at Hampshire College Farm (east of Rt. 116). The adult female  was banded during a June box check. Here is her portrait:

…and here is her beautiful wing.  Sharp eyes might note that she was molting and had both fresh (dark) and worn (lighter) flight feathers:

Our new boxes at Hartsbrook School and New England Falconry continued to host breeding pairs in their second year. Here is one of the chicks, being examined for age so we could determine timing of banding:

We’ll be working on box repairs over the coming months, and we’ll be back in action next March, as will the kestrels, we trust!

About the Kestrel Nest Box Project

Even when you are a healthy, spunky little falcon like the American kestrel, life isn’t easy. That’s why Kestrel Land Trust developed our Kestrel Nest Box Project: by providing more nesting sites throughout the Valley, we are trying to do our part to make their lives a little easier and their population a little stronger.