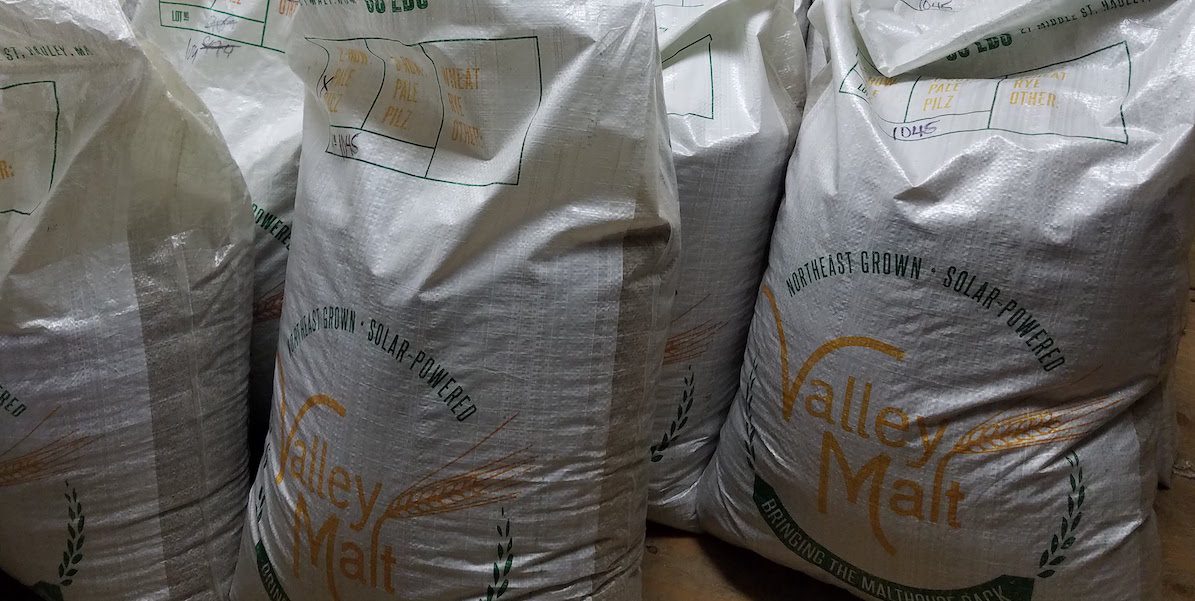 Kestrel Land Trust has embarked on a partnership with three Pioneer Valley craft beer businesses to create a local brew that benefits Kestrel’s work to conserve critical farmland and forests. The new limited edition Farm to Trail Ale is a Roggenbier, or rye ale, brewed by Abandoned Building Brewery in Easthampton using a historic recipe created by Beerology in Northampton and made from local rye and barley malted by Valley Malt in Hadley.

A celebration of this partnership took place on Sunday, March 4 with a release party for Farm to Trail Ale at Beerology, a homebrew supply shop and education center in Northampton. This special edition beer will be available beginning in March at a variety of local restaurants and bars on tap, and in cans at local package stores for a limited time. (See locations here.) Matt Tarlecki, owner of Abandoned Building Brewery, will donate a portion of proceeds from each pint and four-pack sold to Kestrel Land Trust.

The Pioneer Valley is a hotbed of great local brewers. But often, local craft beers use grains grown and malted on a mega-scale on the west coast or in Europe. Here in the Valley, we’re fortunate to have a unique local malthouse, Valley Malt, that makes it possible to keep much of the beer making process local.

“A farmer growing local grain, a local maltster hand-turning that grain into malt, and a local brewer crafting a truly local beer to be enjoyed by their neighbors.” This is a vision from past eras now made into reality by Andrea and Christian Stanley at Valley Malt, the first of only a few malthouses in New England today. It’s a vision shared by Kestrel Land Trust, that includes providing healthy, sustainable farmland conserved forever as the foundation of local food—and truly local beer.

The importance of local grains for local beer goes beyond the benefit of a local supply chain: As Andrea Stanley explains, farmers in past generations used to grow grains like rye and wheat in alternating seasons between vegetable crops as a way replenish the soils in their fields. This technique is being used by the local farmers who provide the grains to Valley Malt, providing a win-win for the land and for local brewing. 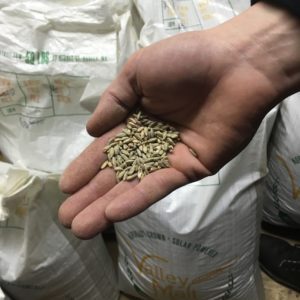 “We are excited to celebrate the Pioneer Valley’s farming heritage with the rebirth of a historic craft beer, and to partner with businesses that care about the local farmland that makes a great local beer possible,” said Kari Blood, Communications & Outreach Manager with Kestrel Land Trust.

Andrea Stanley explains that rye was introduced to North America by colonists who also brought seed for other cereal grains, such as wheat, oats and barley. “Rye is a hardy, scrappy grain that can grow in many soil types and has a unique ability to capture nutrients and nourish soil,” she says. Early colonial towns around the Connecticut River Valley grew rye and relied on it for straw and used the seed to make bread and beer.

Beerology co-owner and master brewer Mike Schilling resurrected the historic recipe for the rye-based Farm to Trail Ale. He explains, “Before the 1516 introduction of Reinheitsgebot, the German beer purity law, Bavarians enjoyed brewing and drinking rye beers. However, the law prohibited brewing with anything other than malted barley, which led to an almost complete destruction of the style.”

Roggenbier today is considered a historical beer style with very few examples on the modern market. The malted rye in Roggenbier produces a richer, spicier maltiness than a wheat-based brew. Schilling says Roggenbiers are usually fermented with a yeast strain that provides aromas of clove, banana, and bubblegum.

Abandoned Building Brewery, based in Easthampton, was opened in 2013 by Matt Tarlecki and has become an integral part of the vibrant brewery scene in the Valley.

Kestrel Land Trust has conserved more than 20,000 acres of forests and farmlands in the Pioneer Valley, to provide local food and recreational opportunities for communities around the region. From Farm to Trail, Kestrel conserves the land people love.