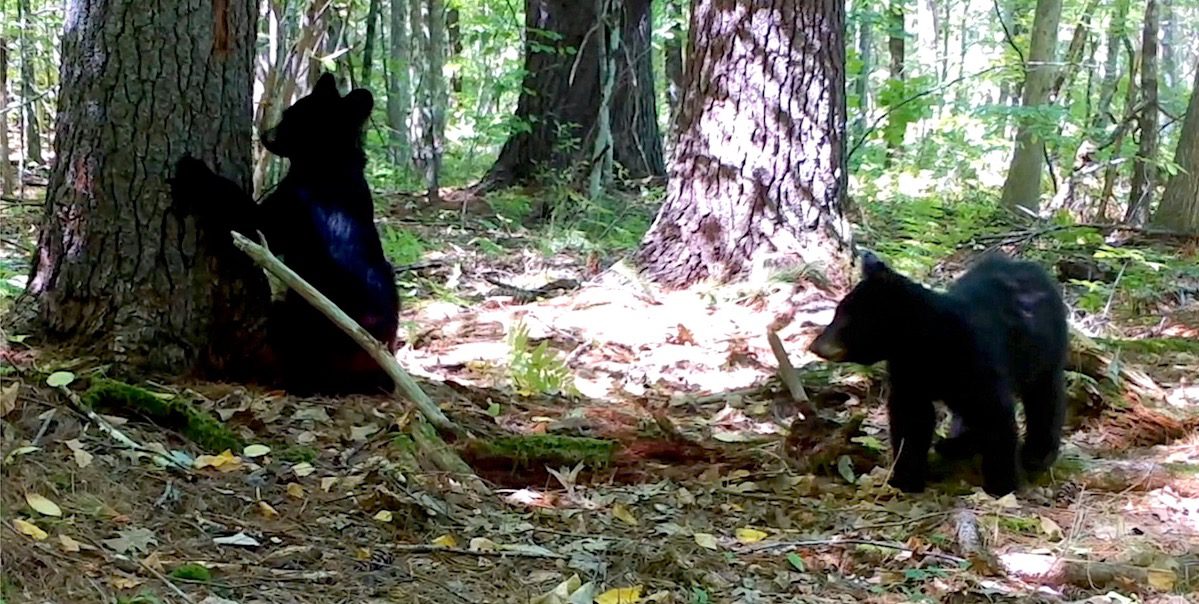 The woods are home to a variety of animals, though humans rarely see them. These days, we can increase the odds with a simple tool: a trail camera.

Last summer, Kestrel partnered with Allison Bell, co-owner of Quonquont Farm in Whately, who admits she’s “addicted” to seeing wildlife activity captured by her trail cameras. As a Whately resident, she volunteered to set up a camera in Kestrel’s Whately Center Woods to help us find out who our wild neighbors are.

“What’s wonderful about cameras is that they give a secret glimpse into animals’ lives. If you see a bear, it already knows you’re there, so it’s not behaving in relaxed, normal-life way. The camera gives you a chance to see that secret world as they do their thing.” 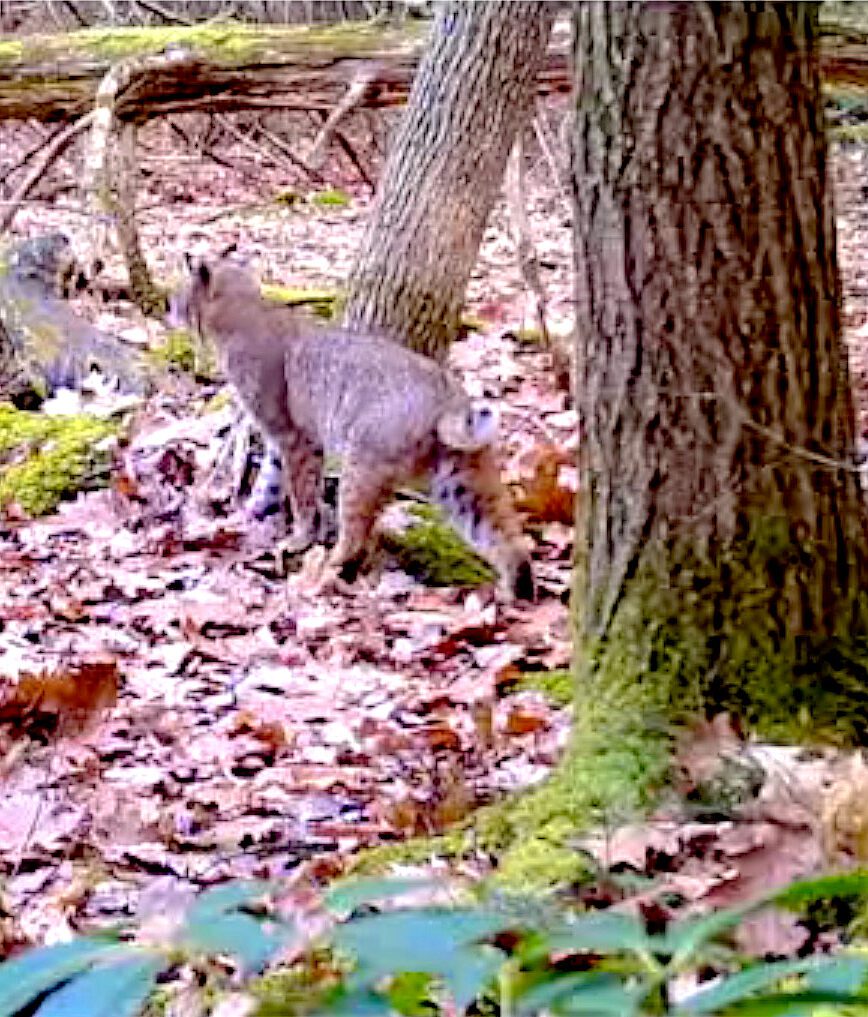 The Whately Woods has several types of habitats—a wet forest, vernal pools, and upper rocky ridges—and each presents an opportunity to see a different kind of creature. “Not all creatures go to all places all the time,” she says. Allison chooses her camera sites by looking for context to help tell the story, with natural structures for animals to walk over or climb. But, she says, there’s a certain amount of luck involved, too.

“These animals don’t have a street address: They don’t live next to Rock 123 on the Ridge, and come home every night for dinner. They move around.” Some animals may take a similar route periodically, like bears who learn where a food source is, but Allison says predators rarely go the same place twice, making it challenging to record species like bobcats.

“These animals don’t have a street address: They don’t live next to Rock 123 on the Ridge, and come home every night for dinner. They move around.”

Busy Bears & Rare Gray Fox
In Whately Woods, mature trees are a special feature. In July, Allison first set up the camera in front of a pair of huge white pines. “Mother bears with cubs like to have quiet places to hang out because they aren’t moving all the time, and they like big trees where they can send the cubs for safety. Once when I went to check the camera, I startled them and the cubs did climb up those trees, so I know they hang out there.”

In fact, when she first set up the camera, another bear hung around to watch her. She left the area to give him space, and when she later checked the video footage, the bear had gone right to those trees and rubbed his body on the bark to scent-mark them. 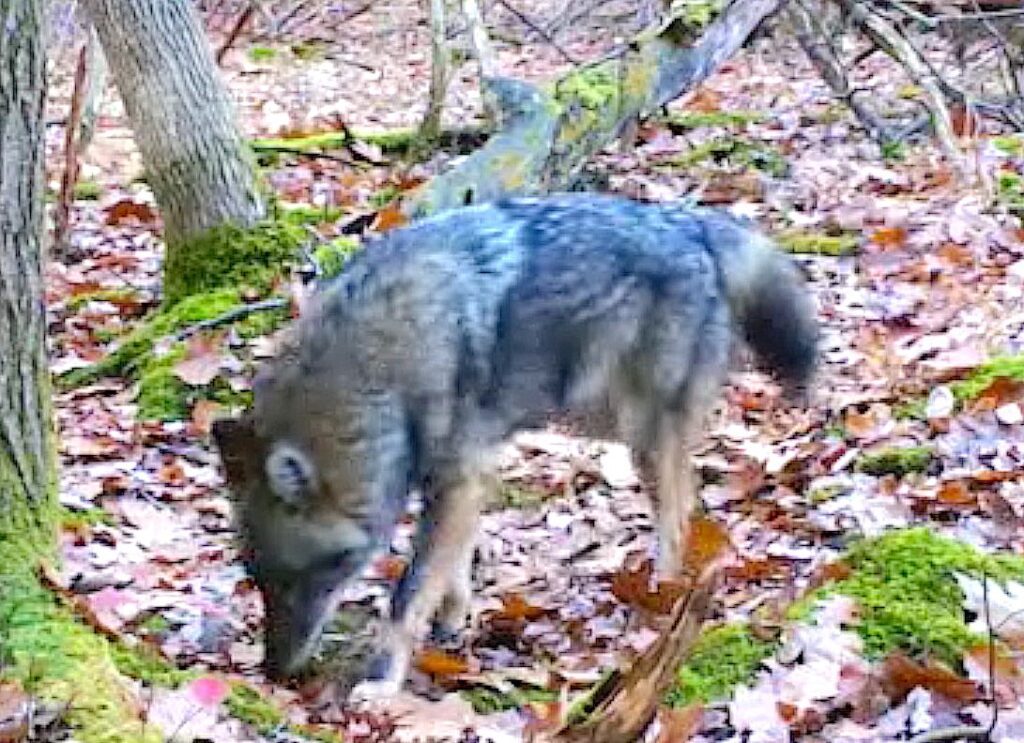 While that first location captured amazing footage of bears, the next location on a ridge captured a beautiful dark coyote, as well as a bobcat. Near the stream, nighttime video captured an elusive gray fox, a species that’s shy and more nocturnal than the red fox. In the winter, Allison found a picked-over deer carcass to use as a focal point, and was amazed to capture footage of a Barred Owl picking at the leftovers for several nights.

This spring, Allison moved the camera to the vernal pool, which she says, “can be a hotbed of activity: all those frogs breeding attracts predators, so we’re looking forward to seeing what happens there.”

You can watch all of these videos on Kestrel’s YouTube Channel right here.

A “New Beginning” for the Robert Frost Trail
A Landscape for All Seasons: Virtual Exhibit & Art Sale
Giving Tuesday: The Power of Nature’s Gifts