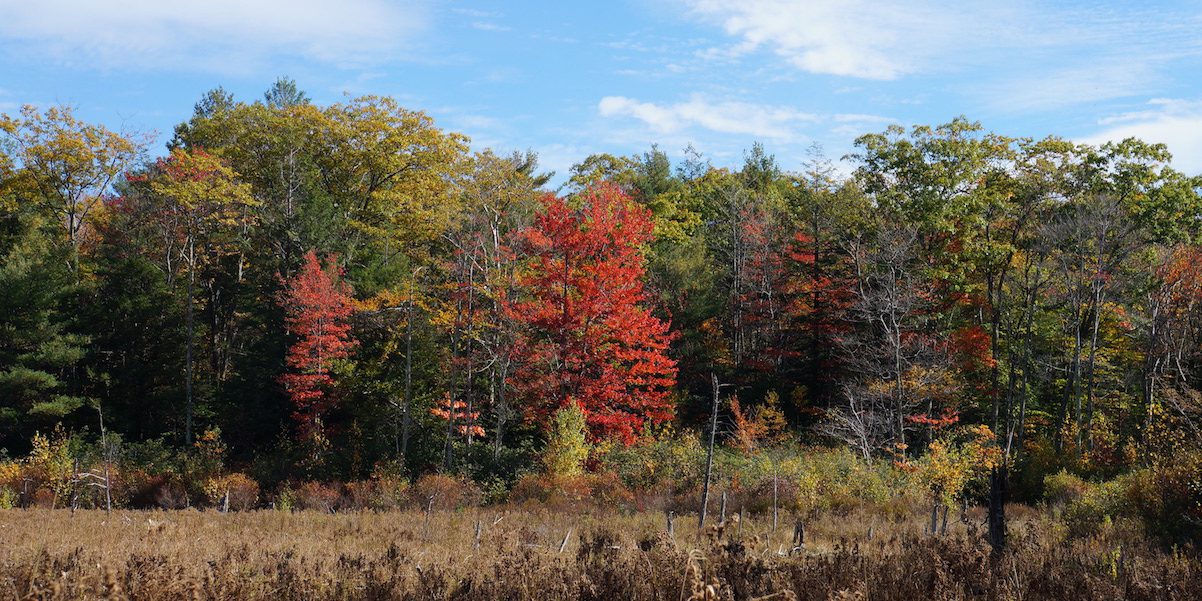 If you were to step outside your door in the Pioneer Valley, and travel back in time 500 years, you would emerge into a landscape of mature forests as far as the eye could see. Huge old trees share the land with middle aged and young trees, and dead trunks nourish the soil. Wildlife is abundant and the air and water are clean, thanks to the cycles of the forests.

Moving forward in time, you’d watch most of these forests fall as the colonists settled and cleared the land, for agriculture and wood products. In the last hundred years, you’d see many forests re-emerge as farming declined, only to be cut back again. Today our region is losing 65 acres of forest per day to development, according to a Harvard Forest report.

This loss isn’t only a threat to wildlife, clean air and water, and recreation, but as science now shows, forest loss threatens our global climate as well. The good news is that protecting our local forests not only safeguards rural heritage and protects wildlife habitat, it is also a natural solution to the climate crisis. Trees capture and store carbon in roots, trunks, branches, and leaves. Conserving more forests globally could capture roughly half of the carbon needed to keep global temperature rise to 1.5 degrees Celsius or less, a 2017 study found. Our New England forests play a globally important role in reducing the impact of climate change.

Scientists are studying forests of all types, and are finding that both mature and younger forests have roles to play. While young forests remove carbon from the atmosphere faster, older forests retain and store more carbon as they age. The rate that forests store or sequester carbon–or release it–changes over time and depends on many factors including human land use, but each process provides benefits. Learn more about carbon and forests from UMass Amherst’s MassWoods experts.

1,000 Acres of Forest Saved in the Hilltowns

Large blocks of forest in our region are critical to this effort. That’s why Kestrel partnered with Hilltown Land Trust, Massachusetts Division of Fisheries & Wildlife, four towns, and seven willing landowners to conserve more than 1,000 acres in Westhampton, Williamsburg, Northampton, and Chesterfield. The lands lie within a 6,000-acre expanse of mostly undeveloped forest, one of the last such unbroken forests in Massachusetts, and conserving this land protects an important network of connected woodlands and wildlands. Being at the edge of the densely populated Pioneer Valley, however, this area faces increasing threats from development.

Of the 1,000 acres conserved, Kestrel now owns nearly 350 acres of forest in Westhampton and Williamsburg that was shown to be highly resilient to climate change. Here, forest stands can be found in every stage of succession along with grasslands, beaver meadows, and wetlands. And, with Brewer Brook running along the property’s western border, the forest supports wildlife ranging from black bear to turtles. 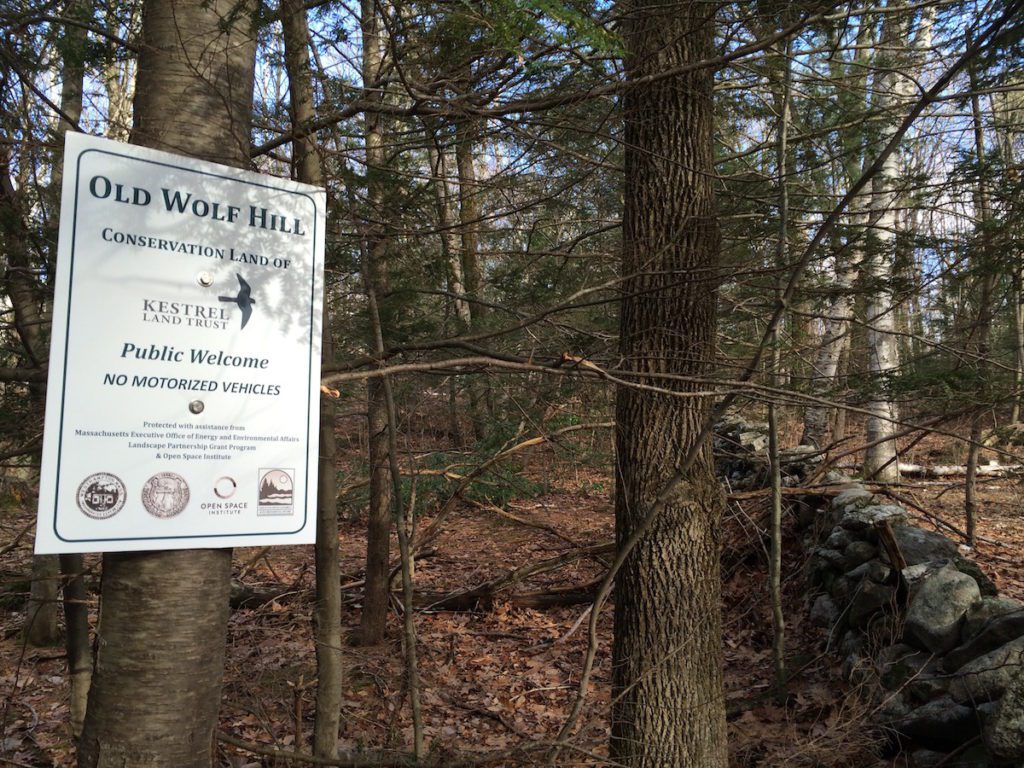 Ecologically, the Brewer Brook forest serves as a centralized core connecting several state and municipal conservation areas, and is part of a key flow corridor for wildlife. It is identified by The Nature Conservancy as one of the last minimally fragmented forests in Massachusetts. As our climate changes, wildlife species have an increasing need to move over larger areas. This project will ensure such areas remain undeveloped.

The project also includes permanent public access to lands cherished for recreation by local communities, and landmarks such as stretches of Brewer Brook, the top of Old Wolf Hill, the side of Hanging Mountain, and multiple large wetlands. It will also formalize existing trails on several properties, connecting established trail networks in Williamsburg and Westhampton.

Kestrel Land Trust protected the 349-acre Collins property in partnership with the Westhampton and Williamsburg Conservation Commissions and facilitated the acquisition of 119 acres of land in Northampton by the City of Northampton. MassWildlife protected two properties—one in Chesterfield and one in Westhampton. Hilltown Land Trust conserved three properties, totaling over 340 acres, with assistance from the Westhampton and Chesterfield Conservation Commissions.

“The Brewer Brook project was well beyond the scope of what any single organization could have achieved alone,” explained Mark Wamsley, Conservation & Stewardship Manager with Kestrel Land Trust. “Working with other partners, we were able tap broader resources, expertise, and networks to achieve a much greater conservation goal.”

Total project costs amounted to nearly $1.6 million with 50% of the funds coming from a Massachusetts Landscape Partnership Project grant. This grant is offered by Massachusetts Executive Office of Energy and Environmental Affairs as an incentive for private and public agencies to come together to protect at least 500 acres of contiguous conservation land. The remaining funding was contributed by the Open Space Institute, MassWildlife, the John T. and Jane A. Wiederhold Foundation, Amelia Peabody Fund, The Beveridge Family Foundation, the Fields Pond Foundation, and gifts from private landowners.

Much More to Be Done

There are thousands more acres of forest in the Brewer Brook area that could be protected for the benefit of wildlife, climate, and recreation, and several additional landowners in the immediate area have expressed interest in conservation. With more participating landowners, a planned Phase 2 of the conservation effort could connect the core Brewer Brook forest to other large blocks of protected land. Kestrel will continue working with landowners and organizational partners to conserve this critical resource.

If you own land in this area and want to learn more about your conservation options, use our landowner interest form to let us know. Keeping all forests as forests is a powerful step we can take locally to reduce the impact of climate change.